A friendly soccer match between Germany and the Netherlands was canceled on Tuesday after a bomb threat because police had “concrete information” about a bomb threat, according to the Associated Press.

Germany’s interior minister, Thomas De Maziere said at a press conference that no explosives were found inside the soccer stadium and no arrests had been made.

A second stadium in the same city was later evacuated; the band Soehne Mannheims had been expected to play there, the AP reports. Parts of the city’s central train station, as well as several other transit stops, have been closed off.

De Maizière, said the soccer match was canceled after “an increase in tip-offs in the early evening,” the Guardian reports.

While the German team’s bus was diverted from the first stadium in Hannover, the fans who had already entered the 40,000-seat arena were evacuated and asked to leave the area on foot, as public transportation was halted, the New York Times reports. German Chancellor Angela Merkel and several other prominent German officials were set to attend.

“There were serious plans to bring something to explode,” said Hannover police chief Volker Kluwe, prompting officials to ask spectators “who were already in the stadium at the time…to leave the stadium without panicking.”

De Maiziere, who was expected to attend match on Tuesday, said that he would not comment on the exact reasons for the decision to cancel the game. “Some of these answers would disturb the public,” he said.

Hannover Mayor Stefan Schostok said he agreed with the police’s decision to shut down the stadium. “Security is always the priority,” he said. “When there is a threat, such steps have to be taken.”

On Monday, another game was canceled between Belgium and Spain because of security worries following the attacks outside the Stade de France in Paris on Friday. 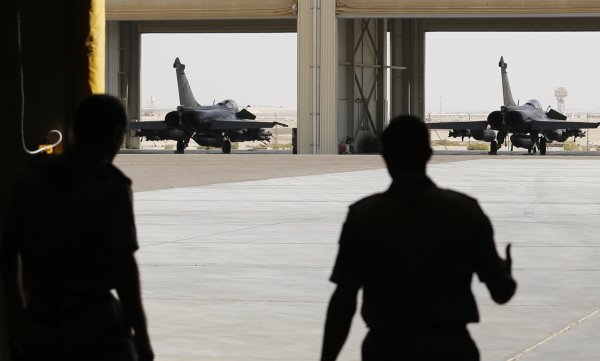