Fewer Men Are Getting Prostate Cancer Blood Tests, And That May Not Be a Good Thing

Health advice is often confusing — and conflicting — and nothing proves that better than recommendations about prostate cancer screening. The prostate specific antigen (PSA) blood test can pick up early signs of tumors in the prostate, but it’s not 100% reliable. And prostate tumors tend to be slow growing and less aggressive than other types of tumors, so more than half of older men will have prostate tumors but will likely die of something other than prostate cancer.

That prompted some expert groups to take a closer look at the evidence on PSA testing, and led them to conclude that it actually doesn’t detect enough serious cancers to justify the potential risks of biopsies and surgery that positive tests can trigger. Since 2012, the U.S. Preventive Services Task Force (USPSTF) concluded there wasn’t good enough evidence to recommend PSA testing for men ages 50 to 75. What the testing was doing, they determined, was leading to over diagnosis and over treatment of lesions that wouldn’t have caused serious disease in the first place.

MORE: Black Men Are Twice as Likely to Die of Prostate Cancer as White Men

Now, in two studies published in JAMA, researchers document the consequences of that decision. They found that rates of PSA testing have declined, in one study from a high of 40.6% in 2008 to 30.8% in 2013 and in another study from 36% in 2010 to 31% in 2013. In line with that decrease in screening, there was a drop in incidence of prostate cancer, which wasn’t surprising since if you screen less, you’ll find less cancer. In one of the studies, cases of prostate cancer declined by 33,519 from 2011 to 2012.

But that doesn’t necessarily mean that there are actually fewer cases of prostate cancer and that the USPSTF advice actually led to an elimination of over diagnosis of the disease. Some doctors are concerned that while most prostate tumors may not be life-threatening, and may not require immediate treatment, some do, and that forgoing screening may lead to more cases of advanced prostate cancer in coming years.

“There are two ways to see PSA screening,” says Dr. Quoc-Dien Trinh, a urologist at Brigham and Women’s Hospital and assistant professor of surgery at Harvard Medical School and an author of one of the studies. “On one side of the fence, prostate cancer is over diagnosed, and you need to treat a lot of men to save one life. But there is also no doubt that if you stop PSA screening, what kinds of prostate cancer are you going to find? Most likely late stage cancers that have metastasized to the bone and are causing pain and bone fractures.”

In making its decision in 2012, the USPSTF weighed the benefits of detecting and treating prostate cancer early against the potential complications from surgery to remove cancerous tumors, which include erectile dysfunction, urinary incontinence and more.

“I am not sure [these studies] resolve the confusion,” says Dr. Otis Brawley, chief medical and scientific officer for the American Cancer Society (ACS), of the latest results. “One of the few things proven for certain about PSA screening is that it finds early stage disease that is of no threat to the patient. It creates over diagnosis. Indeed, it caused us to treat 1.1 million men in the U.S. over the past 20 years who did not need treatment.”

But how many potentially aggressive cases of cancer will be missed if men aren’t being screened? “We don’t know exactly how many of those cancers are lethal that we are missing an opportunity to detect them early and treat them effectively,” says Ahmedin Jemal, vice president of surveillance and health services research at ACS and a co-author of one of the studies.

In a presentation at the Multidisciplinary Meeting on Urological Cancers recently, scientists showed that in a study of 6,822 Dutch men, the benefits of PSA testing were strongest for those over age 55, suggesting that screening may make sense for this group. The American Urological Association currently supports doctors discussing the need for PSA testing with their patients starting at age 55, while the ACS recommends the conversation occur earlier, at age 50.

But with such differing opinions about PSA testing, how should those doctors and patients decide? Dr. David Penson, chair of urology at Vanderbilt University, wrote an editorial accompanying the JAMA studies and argues for a more reasoned approach to PSA testing that isn’t all or nothing. “We can’t keep standing on opposite corners and say, yes to screening or no to screening,” he says.

He points out, for example, that PSA testing might be valuable but just not every year, and not in every man. There are also new ways to detect prostate cancer that may, together with PSA, give doctors a more accurate sense of which men are truly at risk of developing aggressive forms of the cancer and which are less vulnerable. Doctors could be smarter about stratifying their patients according to their risk factors as well, and devising personalized screening schedules for their patients depending on their particular risk, with men who have a greater chance of developing the dangerous forms of the cancer getting tested more frequently and those who don’t fall in that category getting less regular screening. “The reality is that it’s not either-or,” he says. “Both sides have valid points, and I think there is a better way to do this.” 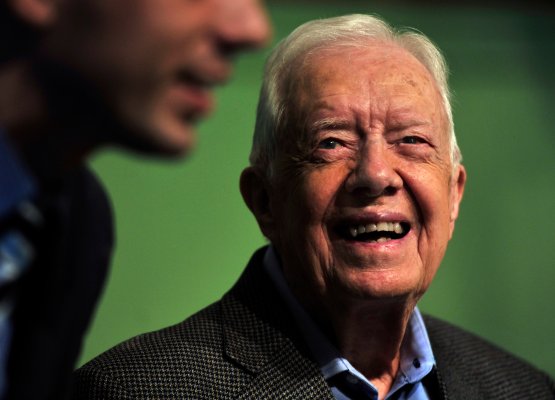 Jimmy Carter Is Responding Well to Cancer Treatment
Next Up: Editor's Pick