McDonald's is Replacing the Dollar Menu With 'McPick 2'

It’s nearly impossible to wean customers off of deep deals.

Two years after McDonald’s phased out its highly popular Dollar Menu without offering diners a suitable substitution, the restaurant chain is set to launch its “McPick 2” menu early next year.

With the new menu, customers can pay $2 for two items among a selection of the McDouble and McChicken sandwiches, small fries, and mozzarella sticks. The price returns some sandwiches to the key $1 point that had fueled McDonald’s astonishing sales growth from 2003 to 2013. Enough franchisees have signed off on the plan to put it on the national menu, where McPick 2 will debut on Jan. 4 with a five-week run.

“These new McPick 2 offers are just the start and are part of a broader value platform grounded in what our customers are looking for—choice and flexibility,” spokesperson Lisa McComb tells Fortune.

The move is the latest by McDonald’s to keep its nascent turnaround going—the company last month reported its first quarterly increase in comparable U.S. sales in two years, with a 0.9% increase and estimates of continued growth in the current quarter. The burger chain is revamping everything, from how long it toasts buns to simplifying its menu to speed up service.

Getting diners to give up such deep discounts as the Dollar Menu is no easy task. McDonald’s learned that firsthand in 2014 after it replaced that offering with its “Dollar Menu and More,” which confused consumers by having so many different price points. 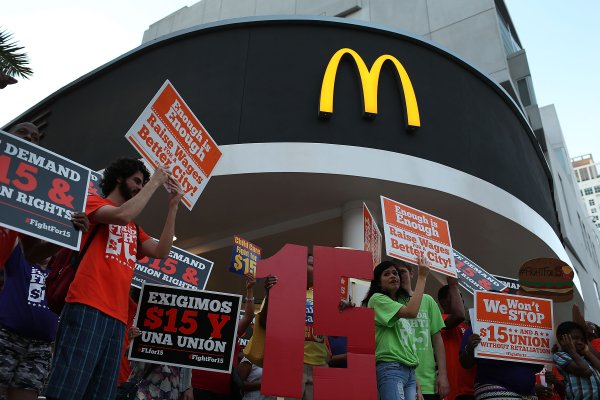 Fast Food Workers Strike in 270 Cities for $15 Wage
Next Up: Editor's Pick