For a Happier Life, Have Sex Once a Week

In news that could flood marital bedrooms around the globe with waves of either relief or anxiety, researchers have found that sex once a week is the optimum amount for maximizing happiness.

The study was based on an analysis of the results of surveys of more than 30,000 Americans collected over 40 years in three different projects. It’s the first study that finds that copulation could be one of those activities that offers diminishing returns.

Before looking up from this and glaring at your spouse, however, be aware that this research and most experts stress that sex is not a one-size-fits-all arrangement—one person’s feast is another’s starvation diet. Moreover, any study of happiness must perforce be about correlation and not causation. It’s possible that people in happy relationships have sex once a week, rather than vice versa. Or that people are happy having sex once a week because they think that’s what everybody else is having.

(For single people, in case you were wondering, there seems to be no consistent association between sexual frequency and happiness.)

The results of the new study are somewhat surprising, as previous investigations into the science of sex had suggested that as far as nooky went, more was always better. “Most people strive to be happier and sex is one aspect of life that is thought to be associated with greater happiness,” says Amy Muise, a postdoctoral fellow at the University of Toronto and lead author of the study. She also notes that the media, from movies to music to news reports, has generally echoed the abundance theory.

But, taking a cue partly from the work of Nobel Prize winning economists Daniel Kahnemann and Angus Deaton, who found that after $75,000 more wealth was not associated with greater happiness, she hypothesized that the same might be true for sex. And according to her results, it is.

The good news for players is that more sex wasn’t associated with lower well-being either, but having sex less than once a week was definitely associated with a drop-off in contentment. In fact, the study found that the difference in life satisfaction between couples who had sex less than once a month and those who had it once a week was bigger than the difference between couples who were quite poor, making between $15,000 to $25,000 annually, and those who were much wealthier, making between $50,000 and $75,000.

However, despite the apparent happiness gains that more sex can bring, the sluggish sales of Addyi—the so-called women’s Viagra—have also suggested that high frequency rolls in the hay are not top of everybody’s must do list.

“Desire is too abstract to measure,” Thea Cacchioni, a sociologist at the University of Victoria in British Columbia, recently told Bloomberg News. “It’s a really recent idea that we should have a high sex desire all the time,” she continued. “We now feel a lot of pressure if we don’t meet the kind of hypersexuality we see in the media.”

Muise says she is still exploring why one appears to be the magic number. “Once a week tends to be the average frequency among established couples so it’s possible that this is the average because more frequent sex is not associated with greater well-being,” she says. “It’s also possible that people feel happy when they think they are at or above the average frequency.” But there’s not a lot of evidence that suggests people are aware how often others are having sex. “Once a week may also be the frequency that people feel is enough to maintain their intimate connection,” she adds.

John Updike wrote that sex is like money; only too much is enough. Muise’s research seems to suggest that maybe sex is indeed like money, just in the opposite direction: only too little is bad. 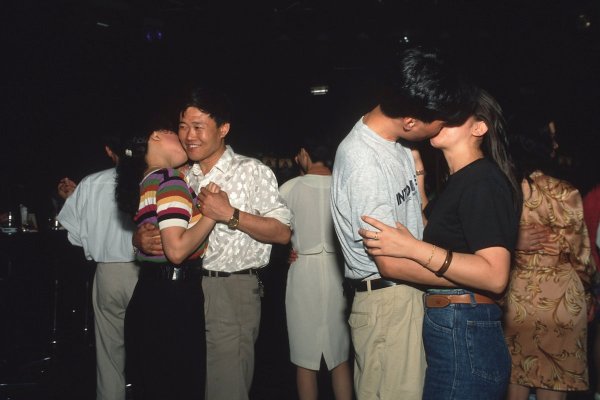 How China's Singles Day Was Part of a Sexual Revolution
Next Up: Editor's Pick