A flower is stuck in a bullet hole in the outside wall of the Café Carillon in the Rue Alibert in Paris on Nov. 15, 2015.
Marius Becker—dpa/Corbis
Ideas
By John Mueller
Mueller, a senior fellow at the Cato Institute and a political scientist at Ohio State University, is the author of Overblown, Atomic Obsession and, with Mark Stewart, Chasing Ghosts: The Policing of Terrorism and Are We Safe Enough?

After the dramatic and horrible Paris terror attacks last Friday, many are alarmed that the ISIS threat is out of control. In a reactive pose that has become routine for the group, it has claimed responsibility for—or, more accurately, boorishly celebrated—the tragic venture that killed 132. But whatever ISIS’s degree of complicity in the Paris attacks, it does not deserve credit for great military prowess.

ISIS’s ability to behead defenseless hostages certainly should not be taken to suggest its military might. Its major military advance, the conquest of the city of Mosul in Iraq last year, was essentially a fluke. Its idea was to hold part of the city for a while in an effort, it seems, to free some prisoners. The defending Iraqi army, trained by the American military at enormous cost to U.S. taxpayers, fell apart in confusion and disarray, abandoning weaponry, and the city, to the tiny group of seeming invaders.

After its advances of 2014, the vicious group’s momentum has been substantially halted, and its empire is currently under a form of siege. On close examination, its once highly-vaunted economic capacity—selling a lot of oil and antiquities—seems to be proving to be as illusory as its military prowess. And it has to work hard to keep people from fleeing its lumpen Caliphate. (As we are constantly reminded, however, its ability to tweet remains strong.)

With that in mind, it seems wise and appropriate to consider a recent proposal by former U.S. Ambassador to the E.U. James Dobbins: to continue a siege of ISIS while the many foreign suppliers of the war in Syria pressure their clients on both sides to establish a cease fire. This would be a decidedly difficult diplomatic undertaking, would effectively partition the country for some time, and would leave Syrian President Bashar al-Assad in office at least for the time being. But as Dobbins, joining specialist Graham Fuller, stressed, “any peace in Syria is better than the current war.” This would put an end to the bulk of the fighting, which currently seems mostly to consist of minor turf shifts and of the mindless lobbing of ordnance on civilian areas, a process that mainly creates refugees. A cease fire might help reverse the flow of refugees and would allow the primary military focus to shift to ISIS.

In recent statements, Assad seems essentially to have accepted an approach like this. And the Russian intervention may just possibly begin to convince straw-grasping insurgents that they can’t win militarily. The best approach to achieving President Barack Obama’s desire for ISIS to be “degraded and ultimately defeated” may be to facilitate the group’s self-destruction rather than relying heavily on direct, and often counterproductive, military measures.

ISIS could still provide inspiration to death cult sycophants around the world even if it essentially fails to exist. And, as the Paris attacks tragically demonstrate, potential targets for dedicated terrorists—peaceful aggregations of civilians—remain legion. But the number of people killed since 2001 by Muslim extremist terrorists in the entire world outside war zones has been some 200-400 per year. That’s 200-400 too many, of course, but it does not present a challenge that is existential. The Paris attacks should not be taken to suggest that this condition will necessarily change greatly.

John Mueller is a political scientist at Ohio State University and a Senior Fellow at the Cato Institute. His latest book, with Mark G. Stewart, is Chasing Ghosts: The Policing of Terrorism. 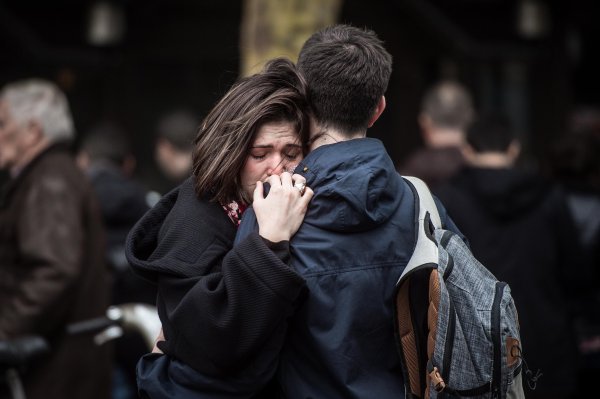 'France Is a Catastrophe': Life in a City Gone Still
Next Up: Editor's Pick