Nepalese police walk by protesters throwing rocks during clashes near the Nepal-India border at Birgunj, on Nov. 2, 2015. Police fired into a crowd of protesters trying to block a key border checkpoint and killed an Indian civilian as anger over a new constitution boiled over.
STR—AFP/Getty Images
Ideas
By Kunda Dixit
Kunda Dixit is the publisher of the Nepali Times and the author of several books, including a trilogy on the conflict in Nepal: A People War, Never Again, and People After War.

After a 7.8-magnitude earthquake struck central Nepal at 11:56 a.m. on April 25, it was headline news worldwide. The international media rushed to Kathmandu on flights crammed with rescue teams. Military cargo planes from China, India, the U.S., Japan and dozens of other countries crowded into Kathmandu’s toy airport with relief supplies.

After a few days, the international media moved on, as they usually do. But Nepal’s emergency was not over, the natural disaster was soon replaced by a political crisis.

For more than two months now, landlocked Nepal’s border checkpoints with India have been virtually blocked, most of them by Indian border police and customs officials, and one by activists from Nepal’s plains-dwelling Madhesi community, who are unhappy with the country’s new constitution. New Delhi officially denies that it is blocking the border, and a limited number of cargo trucks are getting through, but nonetheless imports of petroleum, medicines and earthquake relief material have been choked. A country of 28 million people has ground to a halt, schools are closing, hospitals are turning away patients, public transport is limited, industries have shut, tourist arrivals have plummeted.

The impact of the Indian blockade on Nepal’s economy has now far outstripped damage from the earthquake. Yet, there has been very little international media coverage of the crisis. Nepal is just not strategically important enough, there are no NATO troops here, we don’t have oil and the blockade is too complicated to explain to the world.

Accused of not responding quickly to the earthquake, Nepal’s main political parties decided to redeem themselves by rushing through a new postconflict constitution in August that had been deadlocked for six years because of a dispute over federalism.

But many in the neglected far west of Nepal and along the southern plains bordering India were not happy with the boundaries of new federal provinces in the draft constitution, arguing that they did not give them representation in proportion to their populations. Seven policemen were lynched by angry protesters on Aug. 24, and the violence soon spread and escalated. Fifty people were killed in August and September in protests.

Opposition has been especially virulent in the plains, which are home to just over half of Nepal’s total population and include a significant community of people of Bihari Indian origin. Indian Foreign Secretary S. Jaishankhar made a last-ditch attempt to persuade Nepal’s rulers to buy time to address demands of the Madhesi, on the grounds that New Delhi desires to see stability in its northern neighbor. (The less charitable would argue that India is trying to control Nepal through divide-and-rule.)

He was rebuffed, and the constitution passed a few days later on Sept. 20. Nepal’s new Prime Minister, K.P. Oli, went straight from his swearing-in to grapple with the obstruction by Madhesi activists of border points. It was clear New Delhi was making its displeasure felt by using the protests to effectually lay a siege on Nepal.

Landlocked Nepal conducts more than three-fourths of its trade with India and used to import all its petroleum from Indian refineries. Third-country imports also have to transit Indian territory from ports like Kolkata. To the north, the Himalayan mountains are a formidable barrier to trade with China. The only highway from Kathmandu to Lhasa was badly damaged in the earthquake, and although another border checkpoint has been opened to bring in limited petroleum supplies donated by China, the road is narrow and precarious.

It is clear that Nepal’s rulers failed to read signals from New Delhi, were insensitive to the demands of the Madhesis, and used indiscriminate force to quell the protests which further fueled anger in the plains. The new coalition composed of the center-left UML party and the former Maoist guerrillas is using nationalist rhetoric to paint India as the villain and has needled New Delhi by opening new trade routes with China.

For its part, New Delhi has come across as a mean and heartless bully, insisting that this is not a blockade despite glaring evidence to the contrary, including statements by Indian border-security officials and oil-company representatives who have cited “orders from above” to continue stopping fuel trucks. Indian Prime Minister Narendra Modi had normalized Nepal-India relations after a visit last year and had promptly rushed help after the earthquake. But all that bonhomie has now evaporated. A whole new generation of Nepalis is now so distrustful of India that it will be difficult to push through future joint investments on river and infrastructure projects.

Nepal can choose its friends but can’t choose its neighbors. It is so dependent on India, has done so little to diversify petroleum and other imports that it cannot afford to antagonize New Delhi. China is India’s top trading partner, neither Asian giant will want to jeopardize its economic relations over an irritant like Nepal. New Delhi and Beijing have demarcated their spheres of influence and both need a stable Nepal between them. They consult each other frequently over Nepal developments. So it doesn’t pay for Nepal’s leaders to play India off against China. We can’t eat nationalism.

Prime Minister Oli’s first order of business is to negotiate in good faith with Madhesi leaders in ongoing talks and assure New Delhi that he is serious about addressing their demands. The crisis has polarized hills-plains relations, and he has to make meaningful moves to restore trust.

But most important, his government needs to mend relations with India. Nepal may be the underdog, and India may be overreacting with asymmetrical vengeance, but Kathmandu really has no choice but to massage bruised egos in New Delhi, try to understand where India’s real interests lie and to be smart about it.

The New Delhi establishment also hasn’t realized just how counterproductive this is, and how bad the bullying makes India look. India should learn to pick on someone its own size. 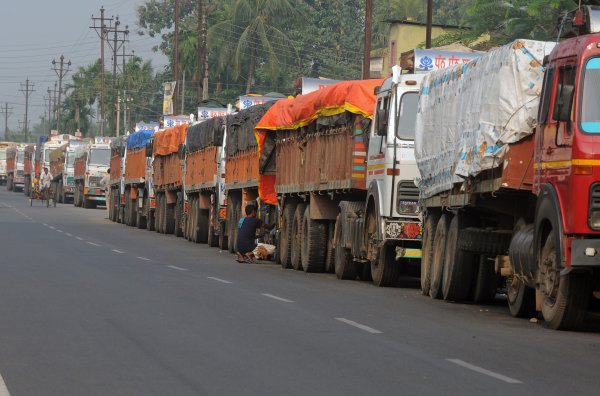 Nepal Border Blockade Leads to Shortage of Medicines
Next Up: Editor's Pick