A student walks by a college noticeboard on campus at Yale University in New Haven, Connecticut on Nov. 12, 2015.
Shannon Stapleton—Reuters
Ideas
By Bradley Campbell and Jason Manning
Campbell is an associate professor at California State University, Los Angeles, and Manning is an assistant professor at West Virginia University. They are the authors of “Microaggression and Moral Cultures.”

The morality of one society can seem alien to outsiders. When we see Aristotle instructing Alexander the Great to treat non-Greeks as if they were plants or animals, or Alexander Hamilton agreeing to fight Vice President Aaron Burr in a duel because he thought it necessary to conform with “public prejudice,” it becomes clear how much ideas about right and wrong can vary.

Whenever moral change is afoot, new patterns of conflict emerge that can seem just as strange. For those who haven’t been following the goings-on of college students, recent events at the University of Missouri, Yale, and elsewhere may have been shocking. At Missouri, a student said people in the back of a truck yelled racial slurs at him as they passed by; weeks later, an intoxicated white student yelled a racial slur at a group of black students. These insults produced a dramatic response in the form of social media campaigns, collective demonstrations, a strike by members of the football team, and graduate student Jonathan Butler launching a hunger strike, calling for the resignation of the university’s president for his failure to take sufficient action. The president and chancellor eventually resigned.

Those surprised by the nature and scale of the reaction at Missouri at least understand why racial epithets are offensive. More mysterious, perhaps, is the situation at Yale, where Professors Erika and Nicholas Christakis, the Masters of Silliman Residential College, became targets of student protestors after Erika Christakis sent out an email questioning whether administrators needed to be involved in advising students about Halloween costumes. Demands for their resignations continue, and protestors have cursed at them and accused them of creating an “unsafe space.”

These cases come on the heels of increased demands for professors to use “trigger warnings” to alert students about uncomfortable material, for universities to address the small slights—or microaggressions—said to harm minorities, to ban objectionable speakers from campuses, and to make campuses “safe spaces” where students are protected from offense of any kind.

What many find shocking about these phenomena is that they involve rejecting previously conventional moral injunctions to ignore insults, recognize the good intentions of those who accidentally give offense, and be charitable and civil toward those with whom we disagree. They instead illustrate a high sensitivity to slight, such that verbal offenses or even disagreements merit a serious response. They suggest a new morality.

In some ways this new morality harkens back to the past. In cultures where men fought duels, insults were taken seriously. Duelists would surely understand that even unintentional slights demand a quick, unconditional and public apology from the offender—or else a serious response. But they would not understand why the offended students are so reliant on authorities. If someone insults you, why not just insult him back or challenge him to a fight?

Even those who eschew such aggressive responses, or at least agree that they are not feasible in particular situations, might be puzzled by the degree of moral dependency displayed on college campuses. Though they expect authorities to handle severe conflicts and protect them from violence, they might find it odd that students would demand protection from mere words. If someone’s words offend you, why not talk it out, or else just ignore it?

To many campus activists, these options must seem as outlandish as dueling. From racist insults to political disagreements to terms that trigger unpleasant memories, they believe words cause great harm. Even unintentional slights are acts of aggression, all hurtful words are a threat to their safety, and it is the responsibility of authorities to protect them. If the authorities’ response is insufficient, they too are offenders, and students appeal to still higher authorities to dismiss these oppressors, or to the public to shame them. Students thus take to social media, stage demonstrations, or starve themselves. Their cause is just, their plight is severe, and others must help.

We might refer to these variations as different moral cultures, characterized by differing degrees of moral sensitivity and moral dependency. But what accounts for the increased sensitivity and dependency? It likely matters that student populations include members of multiple cultural groups interacting as relative equals. Also relevant is that the size and scope of college administrations has grown tremendously and that social media provides ready access to the court of public opinion and, through that, to high-ranking officials who might not otherwise notice or care that a student was offended by someone’s words.

Likely these conditions will continue to give rise to events like those at Missouri and Yale. Moral sensitivity combined with moral dependency means that nothing is beneath concern; nor can concerns be handled without call for official action. Expect more protests to come, more conflict, and more regulation of college students’ lives.

Campbell is an associate professor at California State University, Los Angeles, and Manning is an assistant professor at West Virginia University. They are the authors of “Microaggression and Moral Cultures.” 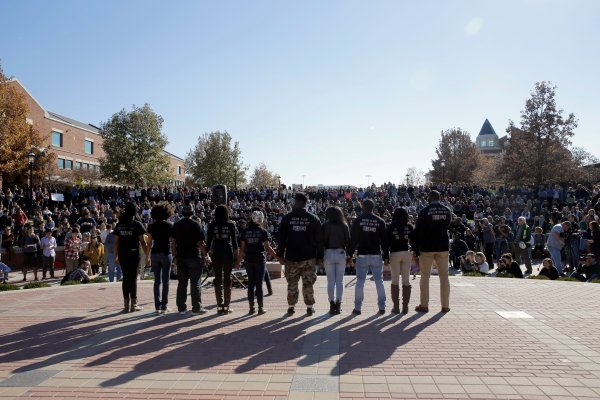 Campus Protests Are Part of a Critique of White Male Privilege
Next Up: Editor's Pick