Relatives mourn over the coffin of Hezbollah member Adel Akram Termos, who was killed in the two explosions that occurred on Thursday in Beirut's southern suburbs, during his funeral in Tallousa, southern Lebanon, on Nov. 13, 2015.
Karamallah Daher—Reuters
By Rishi Iyengar

Nine people, most of them from Syria, have been arrested in Lebanon over their suspected involvement in last week’s twin suicide bombings in the national capital Beirut that claimed more than 40 lives, an official said Sunday.

Lebanese Interior Minister Nuhad Mashnuq said in a press conference that seven of the arrested individuals were Syrian while two were locals, al-Jazeera reported.

“One of [the two Lebanese suspects was] a [would-be] suicide bomber and the other a trafficker who smuggled them across the border from Syria,” Mashnuq added.

The Islamic State of Iraq and Greater Syria (ISIS) has claimed responsibility for the blasts, which ripped through one of Beirut’s busiest shopping districts on Thursday.

Read next: Beirut Wonders if Some Terror Attacks Mean More Than Others 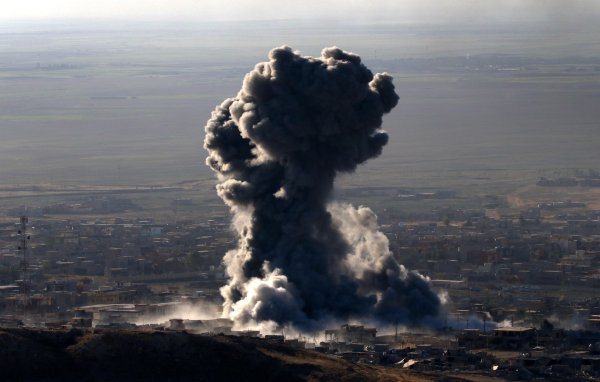 Kurds Backed by the U.S. Aim to Split ISIS Territory
Next Up: Editor's Pick