Wallace D. Loh: The Clash of Ideas Strengthens Our Universities—and Our Nation

Nearly two centuries after his birth as a slave in Maryland, the great orator and abolitionist Frederick Douglass has come home. His statue, just installed at the University of Maryland, now towers over a square inscribed with his soaring words on racial justice and the transformative power of education.

Douglass Square represents both the ideal and the challenge now roiling American campuses: how to reconcile academic freedom and racial justice. The pursuit of truth and knowledge requires both. All are free to speak. Every individual should be included and respected as a member of the campus community—as Douglass put it, to be “treated not as a color, but as a man.”

Last spring, a University of Maryland student’s private email message sent (more than a year earlier) to a handful of fraternity friends went viral. Racist, sexist and misogynistic, it provoked campus-wide outrage as well as fear and anguish among many students.

An official investigation considered the content, time, place, manner and effects of the message, together with interviews of the original recipients. It concluded that while hateful and repugnant, the email did not violate University polices and was protected by the First Amendment.

Still, we held him morally accountable, asking him to learn the values needed for responsible citizenship. Voluntarily, he underwent extensive training in diversity and sexual assault prevention, as did all the members of his fraternity. He performed extensive community service. He did not return to campus that semester.

Many students demanded immediate expulsion, and voiced their hurt and anger when he was not. They deemed these restorative justice measures unacceptable; they considered the outcome to be a tacit approval of his hateful words. Others considered it a vindication of the First Amendment.

Neither response fully addresses the larger conflict. Beyond constitutional jurisprudence, constructive dialogue can only exist when people feel safe enough to speak freely. Students on the receiving end of offensive language and hateful vandalism feel vulnerable and intimidated. They and some First Amendment advocates often end up talking past each other.

A university is a marketplace of ideas. Spirited debate is essential to the pursuit of knowledge and truth. Students should learn the importance of openly and vigorously contesting ideas they oppose rather than seeking their suppression. They must develop strong resilience to offensive speech and attacks on their identity.

The responsibility of institutions of learning is to develop the whole person—the heart and spirit as well as the mind. Students need a safe space to talk about their anger and hurt over racial slights, overt and subtle, experienced on campus. There is a time to engage in intellectual debates. And there is time to hear and acknowledge grievances, whether or not we agree with them, and however they are expressed. That, too, is part of the academic marketplace. The young men and women in our colleges who protest perceived injustices do not wish to be “coddled.” They do want and deserve to be heard.

As simple as it sounds, the pursuit of justice on our campuses also requires us to respond, regardless of whether we can satisfy specific demands. We have a responsibility to address the underlying conditions that give rise to legitimate grievances and the calls to suppress offensive speech.

In the wake of the email incident here, we implemented several action plans to strengthen the campus culture to affirm the dignity of every community member. Students from all organizations—including fraternities and sororities—came together, talked and shared responsibility for educational and outreach programs that exemplify our University’s highest ideals. We made significant investments in African-American studies programs and new faculty positions. A large and diverse group of students advise me on current and emerging issues on race and inclusivity.

Douglass said “If there is no struggle, there is no progress.” It is at times like these when our nation’s colleges and universities become so indispensable. They are the places where the struggle for progress should take place.

The clash of ideas and values does not undermine our institutions of higher learning. It strengthens us all. And it contributes to our nation’s progress towards forming a more perfect union. 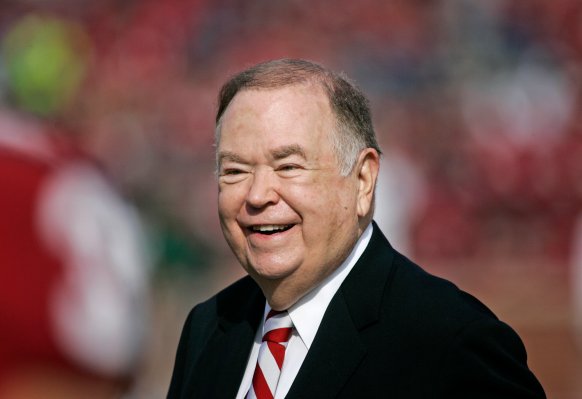 David Boren: 'Zero Tolerance Is the Only Way to Stop the Cancer of Racism'
Next Up: Editor's Pick