David Boren: 'Zero Tolerance Is the Only Way to Stop the Cancer of Racism'

David Boren at Gaylord Family-Oklahoma Memorial Stadium in Norman, OK on Nov. 10, 2012.
Brett Deering—Getty Images
Ideas
By David Boren
David Boren is the President of the University of Oklahoma and a former Governor and U.S. Senator from Oklahoma.

America is experiencing far too many racial incidents. College and university campuses have experienced their share of deeply troubling events.

Last spring at the University of Oklahoma, a racist video was released which went viral. A relatively small group of our students were depicted singing a violent racist chant.

We were shocked. The spirit of community on our campus and our sense of mutual respect were so strong that we thought such an event could not happen here.

I was hosting a group of American historians at a small dinner when I was called to the kitchen of our home and shown the video by a staff member. I immediately decided that if the members of the fraternity involved were our students, that fraternity would be closed within 24 hours and its affiliation with the university cancelled. The next day the windows of the building were boarded up, and the Greek letters were pried off the building. The two students found most accountable were withdrawn permanently from the university.

The next morning, while it was still dark, I spoke to a racially diverse group of several thousand students on campus and marched with them in protest as they chanted “not on our campus.”

Over the next few days, we had many multicultural conversations on campus. We opened lines of communication among minority students, student athletes, members of the Greek community and others. Many took a lead in the healing process.

One of the most important conversations took place in private in my office. About a dozen African American student leaders met face to face with the officers of the responsible fraternity. Each African American student explained why the event was so painful. The students felt excluded, endangered, and disrespected. The fraternity officers seemed stricken by what they heard and apologized.

The apologies were accepted and embraces were exchanged. It was a moving experience for all of us. The first to step forward and offer forgiveness and a bear hug was an African American who is a leader on our football team.

Today, we are a better university and an even stronger community because of what happened.

I learned that quick, decisive action must be taken to confront racism. With immediate access to social media there is no time to advise with lawyers, vice presidents and others. There is only time to consult one’s own conscience and moral compass. Through it all, I kept hearing in my mind the favorite saying of a dear friend, “Do right and fear not.”

Today, all of our students receive sensitivity training to help them better understand and respect each other. There is a new university Vice President for the University Community. There is a new academic department of Native American Students. Each college has a multicultural director reporting directly to the deans. Minority freshman enrollment went up by 8% and African American freshman enrollment went up by 10%.

We are still a work in progress, but we are determined to send a message to the rest of America that zero tolerance is the only way to stop the cancer of racism. Each of us has an individual responsibility to speak out every single time we encounter discrimination and racist remarks. We cannot remain silent. Often we say to ourselves, “Why can’t we all just love and respect each other?” We can—but it’s up to each one of us to take action. 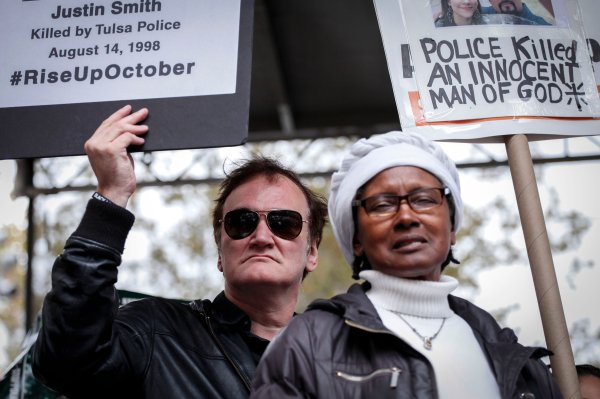 Bully Boycotts Are Doomed to Fail
Next Up: Editor's Pick