Although the opening moments of Saturday’s Democratic debate focused on the terrorist attacks in Paris, disagreements about issues closer to home dominated the two-hour session in Des Moines, Iowa.

Former Secretary of State Hillary Clinton faced criticism from rivals Bernie Sanders and Martin O’Malley. Although she showed her chops on foreign policy, she split with her two competitors on domestic questions in close quarters. It was a preview of the questions Clinton would face if she wins the nomination—a good bet, but not a foregone conclusion.

Specifically, Clinton faced queries about her support of Wall Street investors. “My proposal is tougher, more comprehensive because I go after all of Wall Street,” Clinton said.

“Not good enough,” Sanders said of Clinton’s Wall Street proposals. “The only answer I know is to break them up.”

“It is weak tea. It is not what the people expect of our country,” O’Malley chimed in.

“He has used his answer to impugn my integrity,” Clinton said, holding up her hand and silencing Sanders. She then defended her support of Wall Street, but in a statement that quickly drew criticism on social media, she invoked the fact that she was a Senator who represented New York during the Sept. 11, 2001 attacks.

Clinton also faced questions about proposals to raise the minimum wage. O’Malley and Sanders defended their plans to raise the federal minimum wage to $15, while the former Secretary of State said $12 was reasonable.

The debate, hosted by CBS News at Drake University, opened with the discussion of the brutal terror attacks that took place a day earlier. Coordinated attacks fanned out through the French capital, killing 129 people. The militant group Islamic State of Iraq and Greater Syria (ISIS) claimed responsibility for the carnage.

“Our prayers are with the people of France, but that is not enough,” former Clinton said as she began the second presidential debate.

“Together, leading this world, this country will rid our planet of this barbarous organization called ISIS,” Sanders said.

And the third, former Maryland Gov. Martin O’Malley, said such attacks are the new normal. “This is the new face of conflict and warfare in the 21st Century,” he said.

While the Democrats split on the role of government in America, it was clear that many of the take-away moments would be on foreign policy even before the debate began.

With the City of Lights reeling from the Friday attacks, the Democrats were seeking to prove their mettle as strong commanders-in-chief in a perilous global moment.

But the foreign policy debate had some feisty moments, as well. Looking to steady slipping poll numbers, Sanders said the Islamic terrorism was inflamed by the 2003 invasion of Iraq. “That was one of the worst foreign-policy blunders in the history of the United States,” Sanders said. Left unsaid at first was that Clinton voted to authorize that invasion.

“I have said the invasion of Iraq was a mistake,” conceded Clinton.

At the same time, the candidates were careful with how they described America’s enemies. Asked by moderator John Dickerson if the West was at war with “radical Islam,” as Republicans frequently say, Clinton said it is irresponsible to speak too broadly.

She praised former President George W. Bush, who in the wake of the Sept. 11, 2001, terrorist attacks took pains to say that the United States was fighting extremism, not a faith. Taking her cues from the former President, Clinton noted: “I don’t think we’re at war with Islam. … We are at war with jihadists.”

O’Malley, too, said the United States should be accurate in its language. “Calling it what it is, it’s radical jihad,” he said.

Sanders, who appeared less savvy on foreign policy compared to Clinton, seemed to struggle. Asked at first about the attacks in Paris, he called the terrorists’ actions “barbarous”—before pivoting to his campaign thesis that he is leading a political revolution against the powerful. Sanders later said American military spending is off-kilter. “The Cold War is over,” he said.

The CBS team had been prepping questions on Friday afternoon when reports of the Paris attacks started coming in. It quickly became clear that the debate would have to be rejiggered, and the team was still prepping and adjusting questions on Saturday at noon.

“Last night’s attacks are a tragic example of the kind of challenges American Presidents face in today’s world and we intend to ask the candidates how they would confront the evolving threat of terrorism,” said CBS News Vice President and Washington Bureau Chief Christopher Isham.

How to Watch the Democratic Debate Online for Free 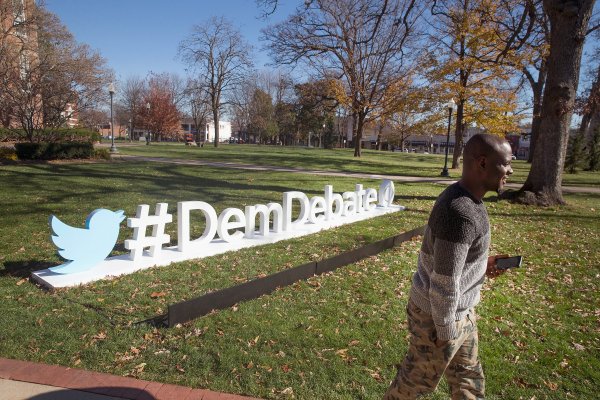 Democratic Debate to Shift Focus After Paris Attacks
Next Up: Editor's Pick