Muslims Around the World Speak Out Against Terrorist Attacks in Paris

Before the Islamic State of Iraq and Greater Syria had even claimed responsibility for the shootings and explosions that killed more than 120 in Paris on Friday night, Muslims around the world took to social media to condemn the perpetrators and defend Islam as a faith of nonviolence.

The bloodshed was linked to Islamic extremists early on, following reports that the perpetrators had referred to French policy towards Muslims and screamed “Allahu Akbar” during the attacks. President François Hollande officially named ISIS as the group behind what he called an “act of war” just before noon local time.

Several Muslim religious and political leaders officially denounced the attacks before the group took responsibility, including Iranian president Hassan Rouhani, who called them a “crime against humanity,” and Qatari foreign minister Khaled al-Attiyah, who said they were “heinous.” Rouhani had been scheduled to visit France as part of a wider European trip this weekend but has postponed his plans.

More spirited responses came from ordinary people. On Twitter, many referred to the hashtag #TerrorismHasNoReligion, seeking divorce Islam from the dogma espoused by extremists.

Many cited the Quran to prove their point. 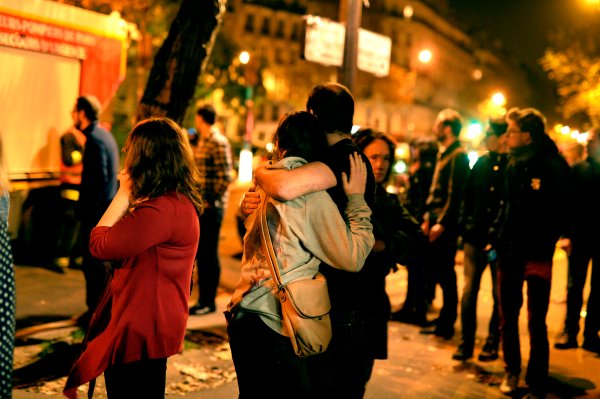