Student officers display an American flag on the Trocadero square with the Eiffel tower in the background during a solemn tribute to the victims of the 9/11 attacks on Sept. 11, 2011 in Paris.
Fred Dufour—AFP/Getty Images
By Nash Jenkins

The American writer David Sedaris was living in Paris with his partner Hugh Hamrick when four airliners were hijacked over the eastern U.S. on the morning of Sept. 11, 2001. On the episode of This American Life that aired ten days later, he recounted the aftermath of that morning as he witnessed it in France. The climate there, he said, was one of torrential compassion.

“Businessmen and widows called the embassy offering their beds to Americans stuck at the airport. And at noon on the official day of mourning, pedestrians stopped in their path and cars pulled off the road to observe the three minutes of silence,” he said. “I stored it up.”

The attacks of Sept. 11 floored the world, and shock translated to sympathy quickly in France. Le Monde made that clear in a headline atop the first page of its Sept. 12 edition: Nous sommes tous américains — We Are All Americans. Sedaris described the flowers that accumulated in the park across from the U.S. Embassy; one American expatriate on Reddit recalls the hundreds of Parisians who had gathered at Notre Dame to sing “The Star-Spangled Banner.”

“I remember watching it on television in Versailles and thinking ‘that can’t be real’ — the same thing I felt this morning,” David Bauduin, a 38-year-old film distributor living in Hong Kong, dwelling place of the second-largest French population outside of France, told TIME. He stood before a smattering of candles flickering along Victoria Harbour, lit to remember the more than 120 people who died in Friday night’s terrorist attacks in Paris.

“When it happened, we said the same thing the U.S. said for us after the Charlie Hebdo shootings: je suis America,” he said. “We’ve always had a connection with the U.S. Even if we’ve had political disagreements, we’re tied by our shared pasts — and now by our shared experiences.”

Within a week of the attacks, French President Jacques Chirac flew to the U.S., the first foreign head of state to meet with President George W. Bush in the wake of the attacks. After his meeting at the White House, he flew to New York, where the scene made him “feel like crying.”

“France… will not stand aside in a fight against a scourge that defies all democracies,” the BBC quoted him as saying at the time. “Today it is New York that was tragically struck, but tomorrow it may be Paris, Berlin, London.”

Chirac would later denounce the 2003 invasion of Iraq, leading to a chilly relationship with the Bush White House and a sense of mutual distrust between the two longstanding allies. But, in 2011, on the tenth anniversary of 9/11, the Los Angeles Times described a massive U.S. flag that was unfurled before the Eiffel Tower. U.S. Ambassador to France Charles Rivkin and mayor of Paris Bertrand Delanoë both attended the memorial service.

The Eiffel Tower itself was flanked by 82-foot-tall scaffolding replicas of the World Trade Center, emblazoned with a new slogan of solidarity, in French and English: Les Français N’oublieront Jaimais. The French Will Never Forget.

“We experienced 9/11 too, with them. We watched the images at the same time,” French teenager Megan Coipel, who brought her own American flag to the service, told the Times.

“It could happen here. We’re not safe from anything,” her friend Maxime Desprez added. 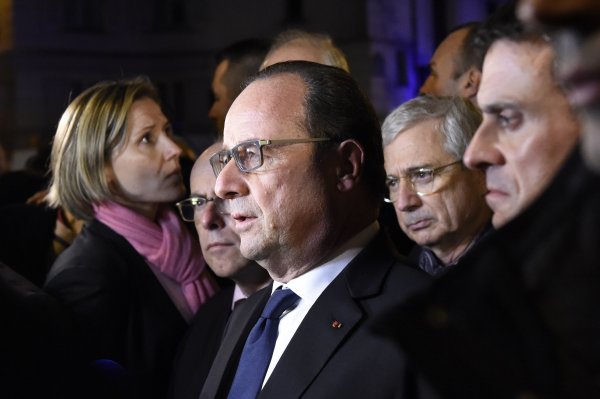 How World Leaders Reacted to the Paris Terror Attacks
Next Up: Editor's Pick