In what appears to be the deadliest terror attacks in France in many decades, at least 128 people were feared killed in Paris on Friday night as a series of deadly attacks was staged across the capital city. Some reports say another 200 were injured, as many as 80 seriously.

President François Hollande declared a state of emergency after an unknown number of gunmen opened fire in the crowded eastern part of the capital, stormed a Bataclan concert hall during a packed music performance, and set off explosives at the French national stadium the Stade de France, which was filled to capacity for a France-Germany soccer game—including with Hollande, who was among the spectators. A Paris prosecutor said more than 120 people are believed to have lost their lives. The head of Paris police said all attackers were believed to be dead.

As of early Saturday morning local time French media was reporting as many as six separate incidents including:

Shortly before midnight, Hollande went on television to appeal for calm and announce his government had shut French borders—a highly unusual move for European Union countries. “We have to be compassionate and we have to be united and keep a cool head. France needs to be strong and the state needs to be strong,” he said. “What the terrorists want is for us to be scared. There are things to be scared about. But in the face of terror we have to be united and we will defeat these terrorists.”

Around 12.30 a.m. local time police in riot gear stormed the Bataclan concert hall to break the hostage siege. The raid ended shortly after 1:00am, with two attackers dead, according to two police sources interviewed by France24. Multiple media reports suggested at least 100 people were killed inside the concert hall alone. Hollande went to the music venue shortly after the hostage crisis ended and sounded a fierce note as he thanked first responders for their bravery. “We will lead the fight. It will be merciless,” he said. “When terrorists are capable of such atrocities, they must be certain that they will face a France united and determined.”

Chems Akrouf, identified as a military intelligence expert on television channel France24 said: “This is France’s September 11th.” There wasn’t an individual target in these attacks, he said, like the police or journalists as before. “Here it’s everyone… we’re sure that it was an act of terrorism where everyone is afraid and says to themselves, I could be hurt. If their objective was to transmit fear, they succeeded.”

Emergency medics at all hospitals across Paris were called into work shortly before midnight, as the wide scale of casualties became apparent. All police leave was canceled. As the news of the attacks whipped through the city, Parisian taxis switched off their meters on Friday night to ferry people home safely at no cost. Police appealed to people to keep off the streets, on a night when Parisians typically crowd into bars and restaurants to kick off the weekend.

Since January, when jihadists claiming allegiance to the Islamic State of Iraq and Greater Syria (ISIS) and to al-Qaeda in the Islamic Maghreb launched a massacre at the Charlie Hebdo satirical magazine and laid siege to a kosher supermarket, the capital has been on high alert. Early details suggest that Friday night’s attacks were far more sophisticated—and more deadly—than those back in January, which involved three gunmen, and killed 14 people.

Parisians have remained highly jittery since the Charlie Hebdo attacks, continually reminded that terror threats remain. There are the bag searches at the doors of major department stores and public buildings, and uniformed soldiers with semi-automatic weapons patrol train stations and major intersections in the capital. All public buildings, including schools, have had red triangles posted on their front doors since January, denoting the highest state of alert in the country. And just last August, three Americans helped to thwart an armed attack on a packed high-speed train from Brussels to Paris, when they wrestled a gunmen to the ground in the passage of the train car.

Worse still, the capital is just two weeks away from hosting its biggest event in many years—the international negotiations of climate change, which opens on Nov. 30 with a gathering of dozens of world leaders, including President Barack Obama.

In the panic late Friday night, the details broke in spurts. The first details of Friday night’s attacks broke at 9.45 p.m. when word came of a shootout at a restaurant in eastern Paris—a neighborhood that is packed with diners at the weekends. Then came worse: a series of explosions at the packed national stadium.

Hundreds of people scrambled on to the field. One of the spectators, Richard M’Barki, told BFM Television by phone shortly after that he had heard three explosions. “There were not many policemen,” he said on air. “People were badly informed.”

In the aftermath of the attacks, Paris authorities announced all city facilities would remain shut on Saturday, from schools and universities to museums, gyms and libraries:

Hollande’s residence said that a Defence Council meeting is convening Saturday morning, while the AP reports that the leader has cancelled his trip to the G-20

With reporting by Susanna Schrobsdorff and Charlotte Alter 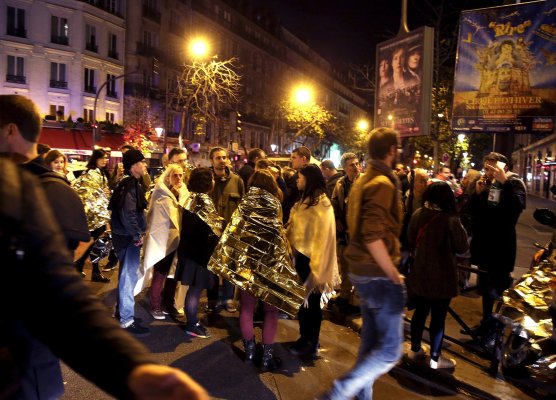 What We Know About the Paris Attacks
Next Up: Editor's Pick