On Friday, the conservative firebrand reasserted his belief that Rubio supported “amnesty” in 2013 when he was one of the co-authors of the “Gang of Eight” immigration reform bill. “In the Gang of Eight fight, Marco chose to stand with Chuck Schumer and to lead the fight tooth and nail for a massive amnesty plan,” Cruz said, referencing the number two Democrat in the Senate, adding that Democrats only want to pass immigration reform to increase their vote share in national elections. “What Republican in their right mind would support that,” Cruz asked, as the crowd shouted Rubio’s name.

Cruz leveled the attack as he is seeking to cast himself as more conservative than the surging Rubio, particularly on the issue of immigration, and as he looks to appeal to the populist supporters of Donald Trump and Ben Carson.

As he raises his rhetoric against Rubio, Cruz toughened his own position on immigration issues, calling for a six-month suspension of the H-1B visa program, which allows highly-skilled foreign workers into the U.S., as well as a halt to any increases to legal immigration until U.S. workforce participation rates increase. The H-1B move is a particularly significant departure for Cruz, who once called for quintupling the number of such visas issued, which are coveted by the tech industry in its hunt for talent.

At the rally, Cruz reiterated his call to end birthright citizenship, reverse President Barack Obama’s executive actions to create “deferred action” programs for some in the U.S. illegally, and to increase deportations. Cruz also pledged to “complete the wall” between the U.S. and Mexico, triple the size of the Border Patrol, and increase surveillance measures on the border.

But notably Cruz remained silent on what to do with the roughly 11 million in the U.S. illegally, and when directly asked about it by a reporter, dodged the question. Cruz maintained in his earlier remarks that he was offering a “detailed” immigration plan.

Cruz had claimed Thursday that Rubio blocked every effort on his part to strengthen border security, telling conservative radio host Laura Ingraham, “Talk is cheap. You know where someone is based on their actions.”

Rubio countered by asserting that he and Cruz broadly agreed on the need for a path for legal status for those in the U.S. illegally. “I’m puzzled and quite frankly surprised by Ted’s attacks since Ted’s position on immigration is not much different than mine,” Rubio told reporters Friday. “Everybody running for president on the Republican side in one way or shape supports some form or fashion of legalization of people that are in this country illegally,” he added, saying, “The debate is what’s the most responsible way to do that.”

“The statement that I supported legalization is flat out false,” Cruz replied Friday, stopping just short of calling Rubio a liar. “Whether he knows it’s false or not, I don’t know. But it is false.”

Cruz said that while he supported the H-1B program in the past, but said he’s reconsidered based after hearing reports of abuses. “In a Cruz administration, I will immediately suspend the H-1B program for 180 days to conduct an intensive investigation and audit,” Cruz said. He said he would reform the program to require advanced degrees, as well as impose new restrictions on companies that bring in foreign employees.

Additionally, Cruz’s campaign said he would, “halt any increases in legal immigration so long as American unemployment remains unacceptably high.”

Cruz also doubled-down on his opposition to President Barack Obama’s announced plan to resettle tens of thousands of Syrian refugees in the U.S. “It is lunacy to bring refugees into this country who may be terrorists trying to murder Americans,” he said. He added that Syrian refugees should be resettled in the majority-Muslim Middle East, while the U.S. should prioritize Christians. “America needs to stand up and be a beacon of hope for persecuted Christians,” he said.

The full Cruz comments on amnesty and Iran: 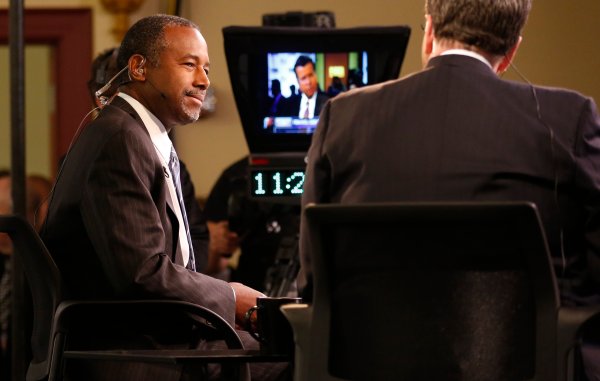