Two years ago, the offices of the Association of Overseas Migration Agencies in the Ethiopian capital of Addis Ababa was a hub of vibrant activity. Scores of staffers answered the needs of the country’s 406 registered overseas recruitment companies, which sent nearly 200,000 Ethiopian job seekers abroad every year. But in 2013, the Ethiopian government put a ban on the agencies, pending a proposal to overhaul a system rife with abuse.

These days, the office compound is empty, save for the Association’s general manager Solomon Melessia and his secretary. That doesn’t mean Ethiopians aren’t going abroad to look for work, Melessia says with a sigh. If anything, he estimates that the number of Ethiopians now using illegal means to reach Europe and the Middle East in search of work has eclipsed the numbers that used to leave legally, despite the dangers of a journey that has killed over 3,000 people so far this year. “Laws, fences, even the risk of drowning in the Mediterranean won’t stop people from migrating,” he says. “The only way to stop illegal migration is to make it legal. And the only way to stop people from migrating is to give them a reason to stay.”

The European Union and the African Union met in the Mediterranean island state of Malta this week to address those very issues in a two-day conference convened in response to the rapidly growing numbers of African and Middle Eastern migrants attempting to reach European shores. While United Nations conventions require that European nations take in refugees fleeing persecution and war, the same does not apply for those simply seeking better economic opportunities, like many Ethiopians.

Yet the number of economic migrants has swelled along with the number of clearer political refugees, overwhelming Europe’s ability to process and house the new arrivals. At the conclusion of the summit, European leaders approved a $2.05 billion “trust fund” designed to address the issue. The European Union is hoping that the promise of funding, scholarships and some legal migration pathways will encourage African leaders to crack down on smugglers, take back their failed asylum seekers and keep would-be migrants at home.

But development programs and stronger policing alone are unlikely to stem the flow of hopeful migrants to Europe’s shores, says Mohamed Yahya, the Addis Ababa-based regional program coordinator for the United Nations Development Program (UNDP) in Africa. What is lacking in Africa today is a reason to stay. “People are running away to Europe because Africa is not generating the opportunities that its young people are seeking. People want to work, but the continent is not delivering.”

Developing those opportunities takes time, investment and political will. In the meantime, the E.U. is considering opening up access to legal migration for African students, professionals and entrepreneurs. Such visas are likely to be extremely limited, due to domestic concerns in individual European nations. Still, it’s a welcome step in the right direction, says Ethiopian government spokesman Getachew Reda. “Seeking opportunity is part of human nature. Even if we were the wealthiest nation in the world, there will always be movement from one country to another.”

Meanwhile, he says, it’s important that African governments play their part by cracking down on people smuggling. In August Ethiopia passed a law that mandates steep fines, lengthy jail sentences and even the death penalty for smugglers. “You can call [the law] draconian, but whoever messes with the lives of our youngsters for the purpose of making money sending them to drown in the Mediterranean in the hopes of a golden life in Europe, well we will make sure they will get it in the neck.”

Education visas are particularly important, says Yahya of the UNDP. Combined with scholarship funds from both European and African governments, they could provide African students the leg up abroad they need to find better opportunities back home. “If you are lower middle class in a country with three universities, the chance of getting the right education is small,” he says. Many migrants don’t intend to stay in Europe permanently. They just “want to better their lives in the short term, and come back competitive,” he says, whether it’s a professional degree, or enough cash to start a business.

Nor will the answer to Europe’s migration crisis be found solely in E.U. initiatives, says Yahya. Many Africans migrants would rather work elsewhere in Africa than in Europe, but legal routes within the continent are limited. “There is no African career path,” he says. “If you are an African in Ghana and you want to work for Coca Cola in South Africa, the work permit process is much more difficult and complex. It might even be easier if you were British.”

Over all, says Yahya, Africa has to work harder at being more attractive for Africans, either through increased opportunities at home or a more streamlined program of intra-African work permits modeled on the E.U. system, which allows citizens to work anywhere within the political bloc. The more reasons there are to stay in Africa, the less likely it is that Africans will risk their lives to seek opportunity, prosperity and happiness in Europe.

Correction: The original version of this story incorrectly identified Mohamed Yahya. He is the Addis Ababa-based regional program coordinator for the United Nations Development Program in Africa. 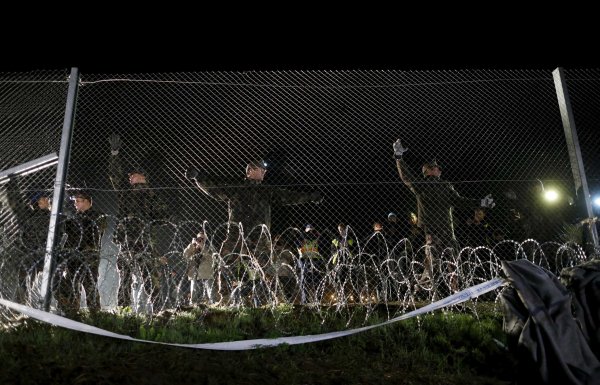 This Is Why Border Fences Don't Work
Next Up: Editor's Pick