Ma, left, and Xi made history when they met in Singapore Nov. 7.
Xinhua—Sipa
By Zoher Abdoolcarim

The handshake lasted 82 seconds, almost awkwardly long, and the smiles were stretched for the cameras too. On Nov. 7, on the neutral ground of Singapore, Xi Jinping, President of China and general secretary of the Chinese Communist Party (CCP), and Ma Ying-jeou, President of Taiwan and representative of the Chinese Nationalist Party, or Kuomintang (KMT), held a brief but historic summit. Big authoritarian superpower engaged small young democracy.

Over the years officials from both sides of the Taiwan Strait have often met, building trust, reducing tension and developing trade worth $130 billion a year. But they have never done so at this highest of levels since Mao Zedong and Chiang Kai-shek met in Chongqing in 1945, to mark their victory over Japan, and since the communists triumphed over the Nationalists at the end of their civil war in 1949, forcing Chiang, his army and the Nationalist elite to flee to Taiwan. Today, Beijing still regards the island as an offshore rebel province to be regained, if necessary by force.

It’s always better to talk than to fight, and there was much mention of peace by Xi and Ma. Yet symbolism aside, the summit was underwhelming, because it was much more about the past than the present or the future. The stress was on a blueprint nearly a quarter-century old: the 1992 Consensus, whereby the CCP and the KMT agree there is only one China without specifying if it’s the People’s Republic of China out of Beijing or the Republic of China out of Taipei. Xi in particular appealed to emotion over policy: “We are family.” “We are brothers still connected by our flesh even if our bones are broken.” “Blood is thicker than water.” The leitmotif was nostalgia.

Ma, whom I have interviewed several times, is decent and well-meaning and wishes well for Taiwan. But he is yesterday’s man. He ends his two four-year terms on a low, his approval rating barely in the double digits. A spotty economy during his tenure, infighting in a fragmenting KMT that lacks a coherent vision for Taiwan, and a broad slate of commercial agreements Ma reached with Beijing have all combined to hurt him. No state can afford to renounce business with China, but many of Taiwan’s citizens believe that Ma has sold out the island. His face-to-face with Xi put him in the spotlight, but after the island’s elections for the presidency and legislature on Jan. 16, Ma will be history. Even some in his own party regard him as a loser.

The KMT may soon be a loser too. Once, the party was as synonymous with Taiwan as the CCP is with China. No longer. From 2000 to 2008 the KMT yielded the government to the opposition Democratic Progressive Party (DPP). It is likely to do so again. The KMT’s presidential candidate, party chairman Eric Chu, badly trails the DPP’s flag bearer Tsai Ing-wen, a Western-educated former lawyer and professor who served in the first DPP administration. The KMT may also surrender its majority in the legislature, which would give the DPP unprecedented authority to rule.

Beijing does not deal with the DPP because the opposition party does not acknowledge the 1992 Consensus and has an independence clause in its ­charter—anathema to the CCP. Even the U.S., which is obliged to assist in Taiwan’s defense, has been wary of the DPP, not least because its previous President, Chen Shui-bian, was a disaster: a mercurial (and allegedly corrupt) character who needlessly needled Beijing. Tsai is different: bookish, informed and serious, yet with a sense of humor. She is moderating and rejuvenating her party, and she wants Taiwan to diversify its economy and not just rely on China. If Tsai is elected, she will be Taiwan’s first female President—and the first female leader of the modern Chinese world. Xi spoke to the wrong person at the wrong time.

Tsai told me earlier this year that unification (reunification to Beijing) with China is something only Taiwan’s citizens can decide. If so, polls show that the vast majority of islanders don’t want it, even as they also reject an overt declaration of independence.

To Xi, who has exponentially expanded China’s global influence and footprint, that’s unacceptable. He has sternly warned Taiwan that its only option is to be a part of China. Xi has floated Hong Kong’s “one country, two systems” formula as a model for Taiwan too, further causing dismay on the island given how Hong Kong’s promised autonomy is being eroded.

China says that it cares for Taiwan. Yet it rejects the island’s desire to create and control its own destiny. If Xi wants to win Taiwan, then he needs to win over Taiwan’s 23 million people. One handshake, no matter how long, isn’t enough. 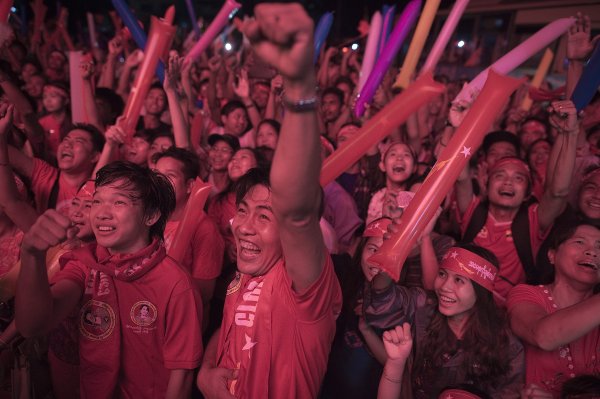