A Brief History of Public Fascination With Hillary Clinton's Hair

Hillary Clinton speaks on stage during a rally after filing paperwork for the New Hampshire primary in Concord, NH on Nov. 9, 2015.
Scott Eisen—Getty Images
By Tessa Berenson

During Bill Clinton’s campaign for the White House and Hillary’s subsequent time as First Lady, she favored scrunchies and headbands, which were the focus of media scrutiny and have now become iconic. In 1994, TIME mused about Clinton’s changing hairstyles, “After months of White House turmoil and indecision, observers are beginning to wonder: When will Hillary Rodham Clinton settle on a hairstyle?” The piece included pictures of her “no-nonsense, working-mom shag” and the “short-lived Betty Crocker-style coif.”

But not everyone was pleased with the coverage of the First Lady’s ‘do. One TIME reader wrote back, “Tsk, tsk, TIME. I am more interested in what is in Hillary Clinton’s head than in what is on it. Shouldn’t you be too?”

Clinton herself is certainly aware of the the dialogue her hair engenders, and wrote in her 2003 book Living History, which TIME excerpted, about struggling to adapt to her new style spotlight:

More recently, Clinton bemoaned the gender double-standard applied to how women look. In an online Facebook question-and-answer session in July 2015, one woman asked Clinton, “I wonder about how the ‘hair and makeup tax’ affects other women — especially ones I admire in high-pressure, public-facing jobs.” She added that as a “young professional woman” she’d like to know how Clinton handles it while “staying focused on the ‘real’ work ahead.”

“Amen, sister — you’re preaching to the choir,” Clinton wrote back. “It’s a daily challenge. I do the best I can — and as you may have noticed, some days are better than others!”

But as the questions, debates, comments and critiques of Clinton’s hair continue, now with her as a candidate rather than a First Lady, her fans have a fashionable way to show their support: by wearing their very own Hillary Clinton scrunchies.

For your security, we've sent a confirmation email to the address you entered. Click the link to confirm your subscription and begin receiving our newsletters. If you don't get the confirmation within 10 minutes, please check your spam folder.
Most Popular on TIME
1
Biden to Propose Citizenship Path for Immigrants
2
Jack Ma Resurfaces After Vanishing From Public
3
Trump's Final Hours 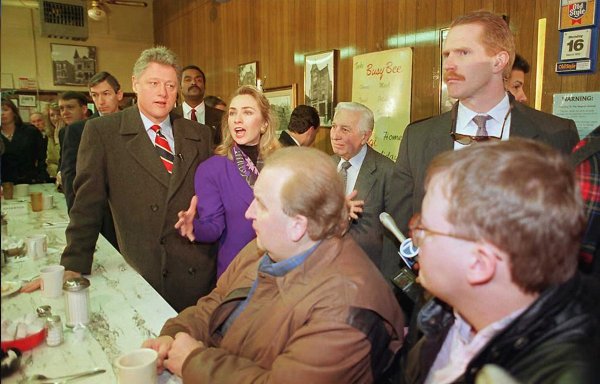 This Was the Hillary Clinton Comment That Sparked Lena Dunham's Political Awareness
Next Up: Editor's Pick