A New Hope for the Treatment and Prevention of Alzheimer’s

Ever since Dr. Alois Alzheimer first described more than a century ago the brain disorder that would later take his name, Alzheimer’s disease has vexed doctors and patients alike. Researchers have made progress over the decades, but so far, their efforts have not done much to slow the disease, much less reverse the damage it causes to the brain once it sets in. In the meantime, the number of people living with the disease is on the rise; by 2050, an estimated 160 million people worldwide will be diagnosed with Alzheimer’s. But now there is an unprecedented slew of promising strategies that scientists think may potentially treat–and even prevent–the degenerative disorder. Here are four advances that experts are hopeful about.

[This article consists of 4 illustrations. Please see your hard copy.]

Researchers are beginning to identify genes linked to Alzheimer’s–but your DNA isn’t always your destiny, and lifestyle choices can also make a difference when it comes to the development and progression of the disease. “We’ve known for some time that knowing your numbers–your cholesterol, your glucose levels and your blood pressure–can lower your risk of heart disease,” says Dean Hartley, director of science initiatives at the Alzheimer’s Association. “But those are important for Alzheimer’s disease as well, and every one of those is modifiable.” A couple of pioneering studies show that improvements in diet, exercise, social connections and adherence to medications can slow and even possibly reverse some of the symptoms of the disease. In one study, the improvements in memory and executive function occurred in as little as two years.

The hallmark of Alzheimer’s, biologically speaking, is sticky plaques of a protein called amyloid that build up in the brain. When the protein isn’t removed fast enough by the body, it forms deposits that strangle–and ultimately suffocate–nerve cells, leading to memory loss and problems with other cognitive functions. Now, thanks to state-of-the-art brain imaging, scientists can see even the tiniest amyloid clusters in the brain long before they cause symptoms. That kind of imaging makes it possible for scientists to test–and assess–drugs that may interfere with amyloid buildup. Some promising compounds bind to amyloid and prevent it from clumping together; others essentially mark the amyloid as an intruder in the brain, which triggers the immune system to target it for destruction.

U.S. Cuts Ties With WHO Over COVID-19 Response

A Real-Time Simulation of Social Distancing at the Beach

Using the immune system to detect and eliminate amyloid plaques and tau tangles (the latter are characteristic of later-stage disease) is a tantalizing idea that researchers have been working on for more than a decade. The first Alzheimer’s vaccine didn’t go well; the trial ended early, in 2002, when six volunteers developed life-threatening brain swelling. But newer vaccines being tested are benefiting from a deeper understanding of the immune system. Researchers are attempting to develop amyloid-based vaccines that would train the body to recognize those troublesome proteins and then attack them–which is exactly how the flu shot and other viral and bacterial immunizations work.

There’s even hope on the horizon for the millions of people caught in the grip of Alzheimer’s–and for their caretakers. While no single drug or strategy is ready for prime time, scientists are working on ways to reverse the disruption that amyloid plaques cause in nerve communication. One of the drugs just starting trials in people is meant to work a bit like releasing the gas pedal of a car, as opposed to slamming on the brakes; eventually, drugs like this may push the balance in favor of processes that help nerve cells in the brain survive in the presence of amyloid–rather than rush to their death. 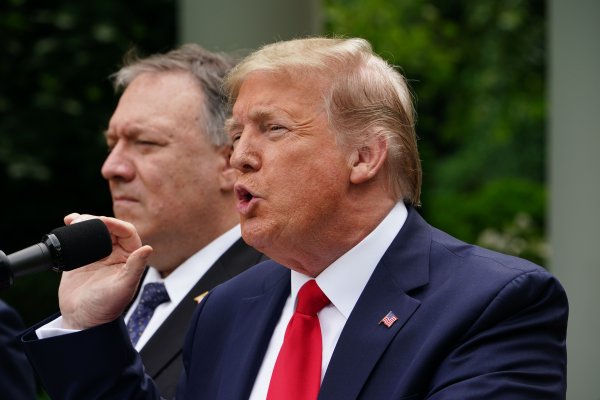 U.S. Cuts Ties With WHO Over COVID-19 Response
EDIT POST