The Yale Controversy Is Really About Belonging

The chandeliers were blazing with light. The long tables were set with china and silver. At the far end of the huge hall, called Commons, hung a colossal blue-and-white banner bearing a single word: YALE.

It was December 1991, and I was a first-year student at the university in New Haven, Conn. With more than a thousand of my classmates, I had arrived at Commons to partake in the annual Freshman Holiday Feast. Just as we were about to take our seats, a sound of trumpets rang out, and the doors to the kitchen burst open. The Parade of the Comestibles, a school tradition since the 1950s, had begun. Dining hall workers carried out platter after enormous platter—some six feet long and borne on the shoulders of two people—piled high with food. To my 18-year-old self, the pageant was irresistibly thrilling, and I still remember the heart-swelling emotion that overcame me as together, we sat down to eat.

This scene from my own life at Yale came to my mind as I read news reports and watched online videos concerning the events unfolding at the university over the past two weeks. A few days before Halloween, a group of administrators from the Yale Intercultural Affairs Council sent out a campus-wide email advising students to avoid wearing costumes that mocked or ridiculed others’ culture or ethnicity. Soon after, lecturer Erika Christakis, the associate master of one of Yale’s 12 “residential colleges,” in which students live, eat, study and socialize, sent her own email, taking issue with the council’s recommendations.

“Is there no room anymore for a child or a young person to be a little bit obnoxious … a little bit inappropriate or provocative or, yes, offensive?” Erika Christakis asked in her message. Referring to her husband, Yale sociology Professor Nicholas Christakis, the master of the college, she continued: “Nicholas says, if you don’t like a costume someone is wearing, look away, or tell them you are offended. Talk to each other. Free speech and the ability to tolerate offense are the hallmarks of a free and open society.”

Students of color at Yale took up the Christakises’ invitation to engage in speech on the issue—with a ferocity that seemed to stun the couple and many others on campus. Videos posted online show minority students weeping and screaming as they encircled Nicholas Christakis in the college courtyard, and as they gathered around Yale Dean of Students Jonathan Holloway outside the university library. “You’re disgusting!” one young woman yelled at Christakis. “I’m disappointed in you,” another student told Holloway, who is African-American.

Needless to say, this is not really about dressing up at Halloween. (No actual offensive costumes appear to have been worn on campus.) Nor is this really about a threat to free speech. (The Intercultural Affairs Council’s email, mildly reasonable in tone, proposed no sanctions for violations of its suggestions.) What this is about is a sense of belonging—a sense that many Yale students of color emphatically do not feel.

As an intimate liberal arts college within a large research university, Yale makes an implicit promise to its undergraduates: When you enroll here, you are joining a community. You belong. For many, including me, this promise is amply fulfilled. From the moment I arrived on campus, Yale felt like home. I loved everything about the place—the cracked green leather of the armchair in my gloriously shabby dorm room, the smell of coffee and bacon in Commons at breakfast—and I felt like the place loved me back.

But I was a white woman who’d graduated from a private prep school. Many of the books assigned to me in my freshman courses at Yale were already on my shelf, well-thumbed and copiously underlined. More important, I was socially at ease. I never thought about my race; I never had to. Nor do I remember thinking much about the fact that almost all of the servers at the holiday feast were black, or that none of my professors were. What felt like perfect belonging to me, I have very belatedly realized, can feel very different to others at the same institution.

Research shows that a sense of belonging is essential for learning. We humans are social beings, wired for membership in a group. Mental resources devoted to monitoring one’s environment for cues of rejection, to fending off suspicions that one doesn’t belong, are mental resources that can’t be allocated to understanding and remembering academic content. The critics who have called Yale’s minority students “crybabies” have likely never had to worry about the security of their own group membership, have never had to operate under the cognitive load that a lack of belonging imposes.

The commentators who see in the students’ protests an attack on free speech are also missing something important. After a year spent on the freshman quad, called Old Campus, most Yale students will spend three years living in their residential colleges—three years under the benevolently permissive but still crucial care of their college’s resident adult, the master. In this context, Nicholas Christakis’s rousing defense of free speech was cruelly off-point; his students told him they were hurting, and he effectively responded, “Hey, it’s a free country.” What good is free speech if no one cares enough to listen to it?

If there is a hopeful sign in the fury and despair expressed by Yale’s minority students, it is that they want and expect to belong to the university in the first place. Their anger is the anger of a promise betrayed. These students are not the consumerists of popular caricature, looking to buy a diploma and four years of hedonistic fun; nor are they cynical and disaffected. They yearn to belong, to feel deeply connected to this institution that has let them in, but only so far. Now Yale has to hold up its side of the compact—extending its pageant of fellow feeling to all the students it admits. 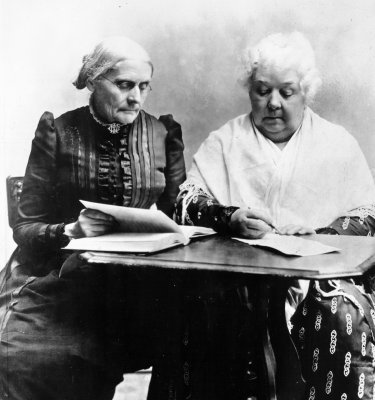 No, Susan B. Anthony and Elizabeth Cady Stanton Were Not Antiabortionists
Next Up: Editor's Pick