Here's the Deal With That Putin 60 Minutes Episode Trump Mentioned

At Tuesday’s debate, real estate mogul Donald Trump argued that he understands Russian leader Vladimir Putin because they both were featured on a September episode of the TV news show 60 Minutes.

“I got to know him very well because we were both on 60 Minutes, we were stablemates,” he said, then he seemed to reference the show’s ratings. “We did well that night.”

The remark drew a rebuke from former HP head Carly Fiorina, who noted that she had met Putin “not in a green room for a show, but in a private meeting.”

But both Trump and Fiorina’s remarks weren’t entirely on the mark. Trump and Putin did not meet in a “green room” for the show, which does not have the typical off-stage waiting area for guests that a talk show has.

In fact, they weren’t even on the same continent. Trump was interviewed by CBS’s Scott Pelley in his New York City penthouse for the season premiere of the hour-long docu-series, while Charlie Rose travelled to Moscow to interview Vladimir Putin.

Trump, who loves to talk about the ratings he got on “The Apprentice,” from previous debates and from last week’s guest hosting of “Saturday Night Live,” was partly correct about how the “60 Minutes” episode did. (edited)

According to The Wrap, 15 million people tuned into the season premiere of “60 Minutes,” but that was down 17% from last season’s premiere. 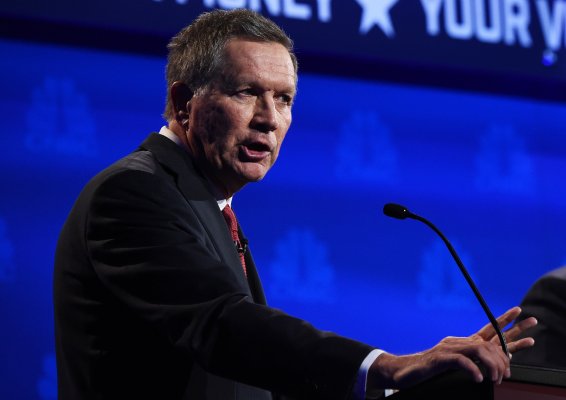 John Kasich Lashes Out at Opponents During Debate
Next Up: Editor's Pick