In Tuesday night’s Republican primary debate, candidate Donald Trump turned to a surprising source for backup on his ideas about the U.S.-Mexican border: President Dwight Eisenhower.

When Gov. John Kasich suggested that it was impossible or at least impractical to deport those undocumented immigrants who are currently in the U.S., Trump countered that Eisenhower had moved 1.5 million such immigrants out of the country during his administration. “They came back. Moved them again beyond the border, they came back. Didn’t like it,” he said. “Moved them way south. They never came back. Dwight Eisenhower. You don’t get nicer. You don’t get friendlier. They moved a 1.5 million out. We have no choice. We have no choice.”

The program to which Trump referred—derogatorily named Operation Wetback at its inception in 1954—was indeed real and intended to combat the relatively new problem of undocumented immigration through Mexico. Though people had been crossing between the areas that comprise Mexico, California and Texas since before the border even existed, TIME noted in 1951 that the phenomenon of unregulated immigration from the south had not really been noteworthy until World War II.

That changed when available agricultural labor in the United States declined during the war as able-bodied young men went off to fight. With a smaller pool of domestic workers to draw from, American business-owners were eager to recruit laborers from Mexico to fill the void, particularly because they were willing to work for extremely low wages by U.S. standards. (Think 20¢ an hour in 1951, which is still under $2.00 in today’s dollars.) A drought in Mexico in the early 1950s made immigration even more appealing to many Mexican farm workers, and the influx of immigrants continued to grow even after the two nations worked together to divert potential migrants into a regulated program for guest workers.

Rising illegal immigration provoked an outcry among some Americans and Mexicans, both because of the perception that immigrants were taking jobs that should have gone to local farm labor and the fact that—without the union protection American workers counted on—many Mexican workers were forced into deplorable conditions. With no easy solution in sight, “Operation Wetback” began, starting with thousands of undocumented immigrant arrests in California and growing to include many more in cities throughout the country.

But Trump’s account of Eisenhower’s program doesn’t entirely mesh with the historical record. Trump was correct that many immigrants were deported during that program’s existence—his 1.5 million figure is along the lines of some official estimates, although some historians argue those numbers are inflated—and that the program did involve bringing Mexican nationals farther and farther south as it progressed. As the Texas State Historical Association explains, the deportees later in the program were moved by ship to move them farther from the border until several of them jumped overboard and drowned.

But the real estate mogul’s account of the operation glosses over the significant criticism the program received. Some farmers and others in affected regions were certainly pleased by the deportations, but after the 1956 drownings became public knowledge the wisdom and morality of the operation were questioned by others. West Virginia Rep. Robert Mollohan led a call within Congress for an investigation into the conditions on the ship after reports emerged they were unsafe and unsanitary.

Trump description of the program also oversimplifies the reasons behind its success. As immigration law expert Bill Ong Hing has pointed out, the existence of the parallel guest worker program was a crucial component of the decline in unregulated immigration during the operation. After that guest worker program lapsed in 1964, illegal immigration ramped up again to fill the work slots left empty. Though it’s possible that the individuals subject to Eisenhower’s program “never came back,” as Trump phrased it, the 1950s deportation drive hardly put the issue of undocumented immigration to bed for good.

Read a 1951 article about immigration from Mexico, here in the TIME Vault 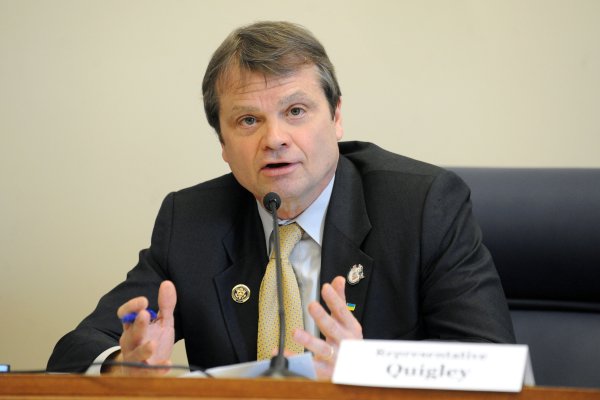 Rep. Quigley: Americans Deserve to Know Everything Politicians Do
Next Up: Editor's Pick