The order effectively shuts down a multibillion-dollar industry in the state — one that has partnered with top professional sports leagues and teams. Legislators in other states could mimic New York State Attorney General Eric T. Schneiderman in shutting down daily fantasy sports sites, creating a domino effect.

FanDuel and DraftKings continue to argue they are not technically taking bets. The sites allow sports fans to create fantasy teams each day and bet on that team’s prospects. The companies maintain that the games involve more skill than luck and thus are legal per a 2006 federal law that outlawed online gambling but created an exemption for fantasy sports teams on the grounds that creating a winning team required skill. Legislators have lately challenged that idea as the sites have offered million-dollar payouts, putting a new focus on how chance might play a role.

The New York attorney general’s office began to investigate fantasy sites after a DraftKings employee won $350,000 on rival site FanDuel. Representatives from DraftKings have claimed that the man did not use privileged DraftKings data—information not available to the public—in order to gain an advantage. Still both companies, which has previously allowed its employees to play on rival sites, issued new rules forbidding the practice.

Since the scandal, partners of the two sites, like the MLB, the NFL and Fox, have publicly backed away from their relationships with the companies.

A representative of DraftKings told the Times that the site had 500,000 users in New York State and expressed disappointment over Shneiderman’s decision not to meet with the company before issuing his opinion. Both companies can challenge the attorney general’s order in court. If they do so, New York State would have to prove that luck is a material factor in the daily fantasy games, and thus users are, by definition, gambling.

The opinion in New York will likely expedite processes already underway to outlaw the practice. On a federal level, the FBI and Justice Department are investigating FanDuel and DraftKings. In Nevada, regulators have already ruled the sites are gambling hubs and suspended their practices until the companies get gambling licenses. Almost a dozen other states are considering new fantasy sports legislation. 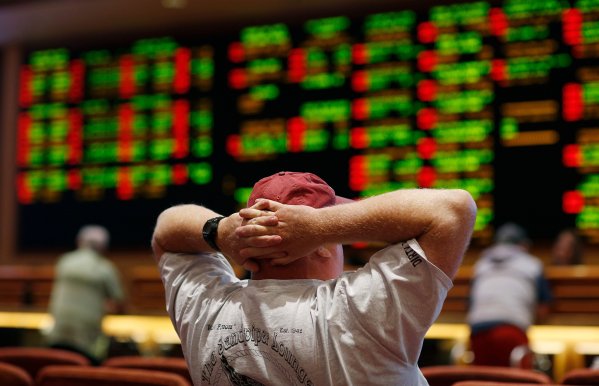 The Risks and Rewards of the Supreme Court’s Sports Gambling Decision
Next Up: Editor's Pick