Vermont Senator Bernie Sanders announced on Monday that as president he would go further than President Barack Obama’s executive actions on immigration, providing immunity from deportation to millions of undocumented people in the United States.

“We cannot and we should not sweep up millions of men, women and children, many of whom have been in the United States for years, and throw them out of the country,” Sanders told a national immigration reform summit meeting in Las Vegas.

Sanders, who is seeking the Democratic nomination for president, said he would use presidential powers to allow all undocumented people who have been in the United States for at least five years to stay in the country without any fear of deportation.

He added that he would not wait for Congress to act to expand Obama’s DACA, or the Deferred Action for Childhood Arrivals.

Former secretary of state Hillary Clinton has also said in the first weeks of her campaign that she would go beyond President’s Obama’s plan and do “everything possible under the law” to protect illegal immigrants from deportation. More than 438,000 were deported from the United States in 2013 alone.

Clinton enjoys widespread support among Latinos, while Sanders has seen much less recognition from the group.

Sanders said he understands the challenge of overcoming gridlock in Congress, pointing to the failure of the 2013 bipartisan Senate bill to pass the House of Representatives.

“Nothing significant is going to happen unless we build a movement,” he said on Monday, echoing his stump speech. 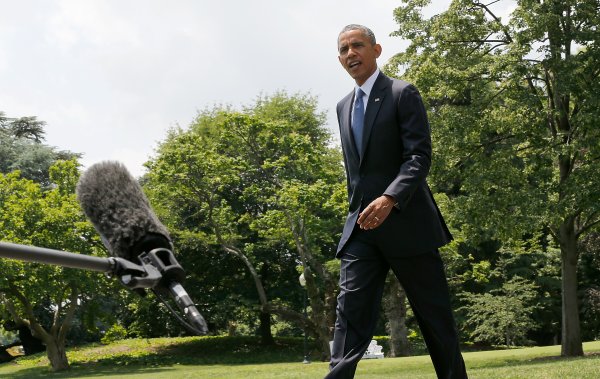 President Obama Launches His Own Facebook Page by Giving a Tour of His Backyard
Next Up: Editor's Pick