Most smartwatches aren’t cheap, but few of them cost more than a few hundred dollars. The $1,500 TAG Heuer Connected, which the Swiss watchmaker unveiled Monday, is one of those rare examples.

At first glance, the Connected doesn’t look much different than an average timepiece. Powered by Google software and Intel hardware, it has an industrial design that’s a bit similar to TAG Heuer’s Carrera collection. The watch comes loaded with three custom watch faces designed by the watchmaker, which resemble an analog watch face rather than a digital clock.

The Connected’s casing is made of a specific type of titanium that makes it feel light for its size. TAG Heuer says this titanium is lighter and more durable than gold and steel, materials found in rival products. For its size, the watch certainly felt lightweight, but wasn’t as compact as other smartwatches I’ve tested, like the Apple Watch and Samsung Gear S2.

Since most of TAG Heuer’s consumers are male, the company catered its first Android Wear watch towards men. This means the design is larger and bulkier than other smartwatches that cater to a unisex crowd. As a result, the Connected occupied much more space on my wrist than the Apple Watch.

TAG Heuer says that it certainly intends to create a smaller watch catered towards women in the future, but didn’t reveal any specific information about those plans. The large size caused the watch feel stiff on my wrist; it might be uncomfortable over long amounts of time.

The clasp also took some fiddling before the watch fit snugly on my wrist. That being said, my wrist is probably noticeably smaller than most people who would be interested in buying this watch.

Where the device excels, though, is in its screen. The watch’s 1.5-inch display was bright enough to clearly view in a dim setting. Even with the backlight turned off the screen looks like it’s partially lit, potentially useful in outdoor settings with intense sunlight.

TAG Heuer also added some tweaks to the Android Wear interface that make the software blend in with the watch’s design. For instance, swiping from the right side of the screen reveals a menu of apps with a grey background that matches the device’s outer rim.

Notifications are also less distracting on the TAG Heuer Connected. The watch will administer a light buzz to alert the user about an incoming message, but the notification doesn’t fill the lower portion of the screen the way it does on other Android Wear watches. Rather, the user can simply swipe up from the bottom of the display to view notifications when he or she feels the vibration. Overall, the interface is slick and easy to navigate.

The $1,500 TAG Heuer Connected isn’t for everyone — it’s bulky, pricey, and offers many of the same features found on other, cheaper smartwatches. Still, TAG Heuer’s goal isn’t necessarily to create the best smartwatch in the world. Jean Claude Biver, the head of LVMH (which owns TAG Heuer along with other Swiss watch brands), emphasized that the idea was to create a watch that looks and feels like a mechanical watch, not a computer.

The Connected succeeds in that regard by offering classic watch faces that are consistent with the company’s non-computerized watches, and by making the Android Wear experience more subtle. But the device’s price will keep it from being a big seller. 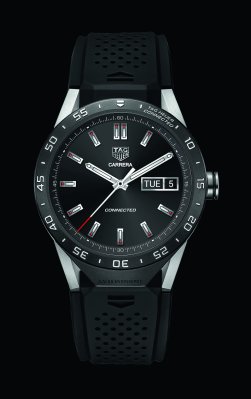 This Is What a $1,500 Smartwatch Looks Like
Next Up: Editor's Pick