Why 24 Indian Filmmakers Are Giving Back Their National Awards

Two dozen stalwarts of India’s film industry announced that they would give up prestigious national awards on Thursday, the latest in a long string of symbolic protests against the country’s growing intolerance of free speech by eminent voices from a range of fields.

The 24 individuals include prominent Indian author Arundhati Roy and veteran filmmaker Saeed Mirza as well as several others, the Indian Express reported. Announcing their decision at a news conference Thursday afternoon, they attributed it in part to “the horror at people being attacked and killed for their beliefs.”

They also expressed solidarity with students from the Film and Television Institute of India (FTII), who recently concluded a months-long protest against undue government interference in academia.

More than 50 writers, intellectuals, artists and scientists have already returned awards to protest a growing climate of hostility toward dissent under Indian Prime Minister Narendra Modi, with incidents like the lynching of Muslims for consuming beef — cows are sacred to the country’s Hindu majority — as well as the murder of a scholar who spoke out against idol worship, prompting a bulk of the fear and anger. 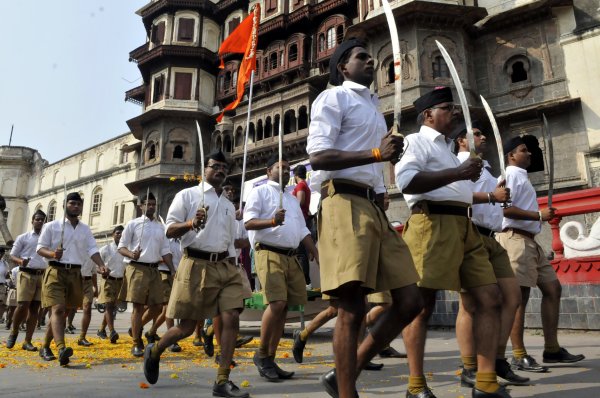 India's Biggest Hindu Nationalist Group May Drop Its Shorts
Next Up: Editor's Pick