The new promotional posters for Star Wars: The Force Awakens get up close and personal with the stars of the seventh installment of the series. Featuring close-up shots of five characters — Han Solo (Harrison Ford), Leia (Carrie Fisher), Finn (John Boyega), Rey (Daisy Ridley) and Kylo Ren (Adam Driver) — with their faces partially obscured by a lightsaber or other weapon, the posters don’t really divulge any new information about the film.

However, fans were still extremely excited by their reveal and reacted, of course, by creating their own versions of them using random objects to cover their faces.

Others were jealous they hadn’t gotten their own close-ups.

While these two just wanted to show off their photo juxtaposition skills.

And then there was this guy, the only person who understood what the greatest weapon of all is: chocolate. 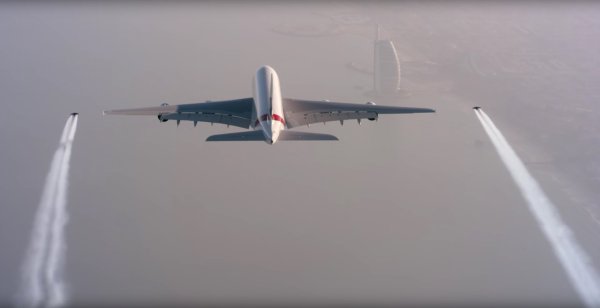 Watch Jetpack-Wearing Daredevils Race an Airbus Over Dubai
Next Up: Editor's Pick