Ben Carson Would Get a Beer (Or Orange Juice) With Jesus

Sitting at a table in what appeared to be a diner, Univision host Jorge Ramos asked Republican presidential candidate Ben Carson who he’d like to get a beer — or orange juice — with.

(And it would have to be an orange juice, since Carson, like most Seventh Day Adventists doesn’t drink. “Root beer. No alcohol,” a campaign spokesperson replied when asked.)

Carson’s interview with Ramos, which was livestreamed on Facebook Thursday, focused mostly on race and immigration issues, but the retired neurosurgeon dodged Ramos’ two most-pointed questions on immigration.

First, Ramos asked if Carson would revoke the Deferred Action for Childhood Arrivals program, an executive action taken by President Obama that allowed children brought to the U.S. illegally to avoid deportation. Carson answered that he wasn’t sure yet.

Then Ramos asked the former neurosurgeon whether he would end birthright citizenship.

“You have to look at the 14th Amendment and ask yourself why it is there,” Carson replied. “It was to address the situation of the freedmen. It was not put in there specifically for the purpose of allowing people who are not citizens to come in an anchor themselves to the country.” He said the amendment gives Congress the power to enforce it, and said, “I would encourage the Congressmen to do their job in conjunction with their constituents to clarify the situation.”

Ramos also asked Carson about his new rapping radio ad. “There are members of our campaign who thought that that was something that would resonate with a lot of people,” Carson said.

Read Next: Why Ben Carson Is Running for President 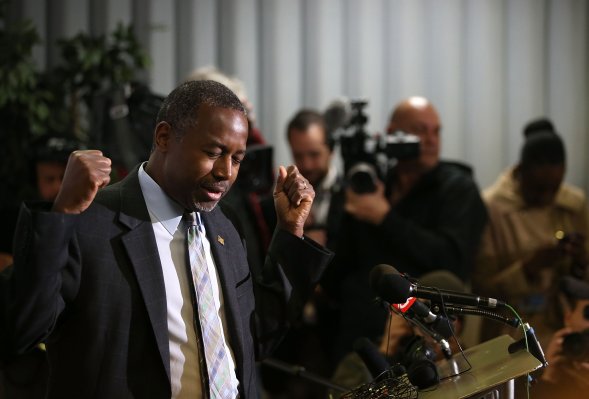