What We Know About the Cause of the Russian Jet Crash

Toys and flowers in memory of the plane crash victims lie at Dvortsovaya Square in St.Petersburg, Russia on Nov. 5, 2015.
Ivan Sekretarev—AP
By Jared Malsin

British Prime Minister David Cameron said Thursday that the Russian jet that crashed in Egypt last Saturday was “more likely than not” brought down by a bomb although the investigation has yet to be concluded.

Cameron spoke a day after the British government decided to ground flights to and from Sharm el-Sheikh, the Red Sea resort town where the airliner took off on Saturday morning headed to St. Petersburg.

The cause of the crash on Oct. 31, remains undetermined as investigators from several countries continue to work in Egypt. The crash killed 244 people on board the chartered flight, mainly Russian tourists returning from the picturesque resorts along Egypt’s Red Sea coast.

If the plane was destroyed by a bomb, it could mark a shift in the battle between the Egyptian state and Sinai-based militants, and in the larger battle with the Islamic State in Iraq and Syria(ISIS), which controls large parts of Iraq and Syria.

The local branch of ISIS in Sinai claimed it brought down the airliner on Saturday. The Russian and Egyptian governments rejected that claim, for which the group offered no proof. But if proven true, it would mark the first time the Sinai-based militant movement has carried out an attack resulting in mass civilian casualties.

“There’s still an investigation taking place in Egypt. We need to see the results of that investigation,” said Cameron. “The reason we’ve acted before that is because of intelligence and information we have that gave us the concern that it was—more likely than not it was a terrorist bomb.”

The theories of possible causes of the crash range from a mechanical failure to the possibility that a bomb was smuggled onto the plane. British aviation security experts inspected Sharm el-Sheikh airport earlier this year but concerns about poor security remained. Tony Lesser, a British tourist, returned from Sharm el-Sheikh last month, and said he was very concerned about security which could be easily bypassed. He told the BBC that local people walked freely around the airport and the system for scanning and checking luggage appeared very relaxed.

Cameron’s comments added to mounting concern that the crash could have resulted from militant activity although the Russian and Egyptian governments have not arrived at that conclusion. A spokesman for Russian President Vladimir Putin told reporters that Moscow “cannot rule out a single theory” about the crash, according to the Associated Press. A statement from the Egyptian civil aviation ministry said, “The investigation team does not have yet any evidence or data confirming this hypothesis.”

Satellite surveillance detected a flash of light at the moment the Airbus A321 broke apart in air on Saturday, according to U.S. military officials cited by the New York Times who made that information available to the news media. That could be evidence that there was an explosion onboard the plane either in a fuel tank or resulting from a bomb.

Neither the U.S. nor the British governments are part of the multinational team investigating the crash in Egypt. Officials from Egypt, Russia, Ireland, Germany, and France are involved in the investigation.

Experts have all but ruled out the possibility that the plane was shot down, since the airliner was flying at its cruising altitude of more than 30,000 feet when it started descending, higher than the reach of any weapon known to be in the possession of Sinai militants.

The crash has also cast a glaring spotlight on Egypt’s president Abdel-Fattah el-Sisi, a former military commander who led the armed forces in deposing the elected Islamist president Mohamed Morsi in 2013.

Sisi is currently visiting London in a visit denounced by human rights groups who point to the record of Sisi’s government, which has carried out a crackdown on political dissidents and Islamist groups, jailing some 40,000 people according to several rights groups.

A slow-burning insurgency has existed in the Sinai Peninsula for years, but the insurgents’ attacks expanded in number and scope after the removal of president Morsi. Those attacks have intensified in recent months, with deadly attacks focusing on Egypt’s military and police.

In the wake of a wave of attacks over the summer, including the assassination of the chief prosecutor in a daylight bombing, the Egyptian military has gone on the offensive against the militants, killing hundreds in a campaign it calls Operation “Martyr’s Right.”

However, throughout these battles, it has been an open question whether, after joining ISIS, the home-grown Sinai insurgents would shift tactics and stage more attacks on civilians.

“It’s something that, in a sense, everyone’s been bracing for since 2013. It’s almost surprising that there haven’t been more attacks of this type,” says Issandr el-Amrani, the director of the North Africa project at International Crisis Group. “In a way it’s been fortunate that there hasn’t been, like in the 1990s, attacks against hotels, against politicians and so on,” he says when reached by phone.

The militant group, which now calls itself the “Sinai Province” of the Islamic State, has killed civilians in the past. In 2014 a bomber killed four people, including an Egyptian driver and three tourists from South Korea in the Sinai town of Taba.

“The last 24 hours have been filled with speculation and people over-interpreting what the British said,” says el-Amrani, “To me it seems still speculative, and the U.S. government clearly is not ready to make an official statement on the issue.”

Sharm el-Sheikh and the other Red Sea resort towns were also struck with a series of bomb blasts between 2004 and 2006, which killed 145 people. But in the context of the recent insurgency, the northern and southern sections of the Sinai Peninsula have taken on the appearance of separate worlds.

In the north, the military is engaged in an intense battle with the insurgents in a world of checkpoints and bombed-out buildings. On Wednesday a suicide bomber killed at least four members of the police in the town of el-Arish. The military says it has killed hundreds of militants in the north in its recent campaign there, but it is nearly impossible to verify those claims, as the area is off limits to most journalists.

Human rights groups say the government is using a heavy hand in the north. The authorities demolished at least 3,255 buildings, expelling thousands of people from their homes over slightly more than two years, according to a report from Human Rights Watch published in September.

More than 200 miles away from the center of the insurgency, south Sinai is a placid world of elite hotels and low-slung beach camps, where tourists go to enjoy world-class diving and relax against a backdrop of jagged mountains plunging into shimmering blue water. The question, for some, is whether that will change. 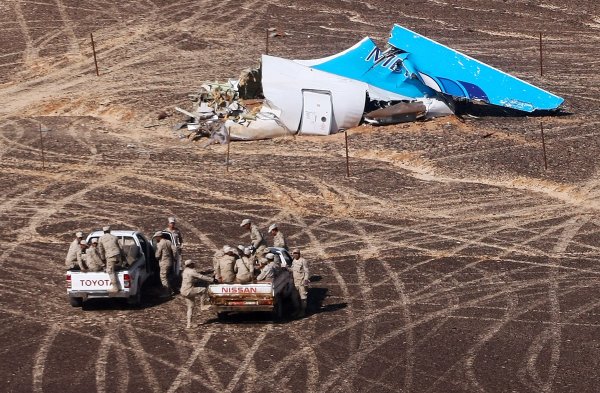 See Photos From the Russian Plane Crash and Its Aftermath
Next Up: Editor's Pick