Though now rendered in 3-D, Snoopy and Charlie Brown are familiar as ever
20th Century Fox/Peanuts Worldwide LLC
By Isaac Guzmán

Having suffered yet another humiliation in The Peanuts Movie, Charlie Brown takes stock of his life and imagines reinventing himself as a winner. In his fifth big-screen incarnation, the desultory everyboy and all his pals, from Snoopy to Pig Pen, have been transformed into three-dimensional beings, and Charlie now sports a semisculpted single hair on his forehead and subtle texture in the fabric of his yellow shirt with its jagged black stripe. As he considers his klutzy past, his memories flit by as black-and-white comics pulled straight from the archives of Charles M. Schulz–soaked to the bone by a rain cloud while standing on the pitcher’s mound, flat on his back after an umpteenth attempt to kick Lucy’s football.

When the Little Red-Haired Girl moves in next door, a smitten Charlie undertakes a cringeworthy campaign to impress her. Then he improbably achieves cool status thanks to a perfect score on a big test. At first he warms to the attention–even Lucy thinks he’s a genius! Then it makes him squirm, especially when he learns it’s all a mistake. He could have been the hero; instead he’s just the goat.

In this digitally produced, 3-D domain, the Peanuts gang feels remarkably familiar. Their heads may be spherical, but their facial expressions are still rendered in Schulz’s two-dimensional scrawl. Their voices remain understated and childlike, while the squawking speech of adults is more nuanced than ever, performed by New Orleans musician Trombone Shorty.

With a screenplay co-written by Schulz’s son Craig and grandson Bryan (plus Bryan’s film-school pal Cornelius Uliano), the new film hews strictly to the past. The first 30 minutes is dedicated almost entirely to scenes and settings lifted from early strips of the ’50s and ’60s–from the kite-eating tree to Snoopy’s “dark and stormy night” to Lucy’s psychiatric-help booth, which still charges a nickel. Charlie even gets tangled up in the extra-long cord of … a telephone. Cell phones and computers have yet to reach this preserve of youth, and nobody blinks an eye when Linus shows off a toy triplane just like the Red Baron flew in “the Great War”–because, sure, kids everywhere understand casual references to the dogfighting aristocrats of a century-old conflict.

As directed by Steve Martino (Horton Hears a Who!, Ice Age: Continental Drift), The Peanuts Movie is deeply rooted in the look and tone of Schulz’s soulful comic strip. Visually, it retains the linear simplicity celebrated in a new book, Only What’s Necessary: Charles M. Schulz and the Art of Peanuts, by graphic designer Chip Kidd and photographer Geoff Spear. Their collection of the cartoonist’s drawings and ephemera reveals a creator so obsessed with refining his characters that they reached their final forms only by 1965, which happens to be the year they were featured on the cover of TIME.

In the 50 years since Schulz’s comic was first animated, with 1965’s A Charlie Brown Christmas, more than four dozen Peanuts TV movies and specials have been issued. But only that first show and It’s the Great Pumpkin, Charlie Brown, made a year later, remain essential. With Linus’ riveting soliloquies about clinging to faith and sincerity in the face of voracious materialism, they managed to be simultaneously uplifting and heartbreaking.

The Peanuts Movie aims for the same frisson of underdog triumph. But when the Little Red-Haired Girl tells Charlie that he’s a genuine winner, her accolades sound like the cloying lines of a “very special episode.” Yes, Charlie Brown finally gets the girl, but Peanuts traditionalists wind up feeling good grief for an opportunity missed. 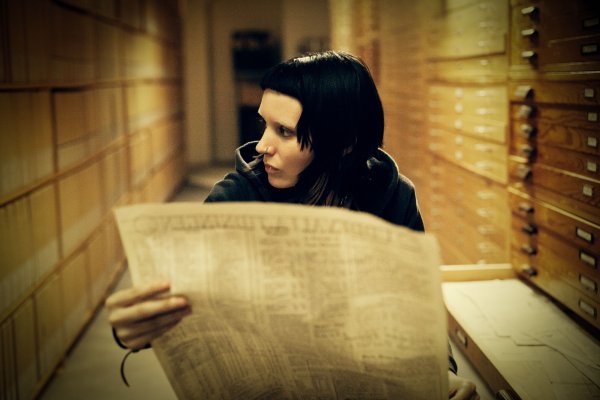 The Girl With the Dragon Tattoo Sequel Film in the Works
Next Up: Editor's Pick