Shonda Rhimes: "I Did Not Feel Like I Had Come Up Against Obstacles"

Shonda Rhimes is the woman behind some of TV’s most talked shows: Grey’s Anatomy, Scandal, Private Practice and How to Get Away with Murder. She pretty much owns Thursday night. Now she has a new book out, Year of Yes, about how she, an introvert, made herself say yes to a bunch of things she used to hate to do, like public speaking and having difficult conversations. She also maintains she hasn’t broken through any glass ceilings, all appearances to the contrary. Here’s how she explains it all.

In the intro to your new book, Year of Yes, you say that you like to lie. Are lying and writing fiction connected? I think that spinning stories and “working on the truth,” I like to call it, are connected, definitely. I think that the reality of life is a little bit more interesting when you add a little something to it I’ve always found, or at least I used to find when I was a kid.

The book how you overcame introversion. Yet you’ve publicly spoken— and written—about stuff that’s pretty personal. How do those traits coexist? I guess that the act of opening one’s mouth at all is the hard part. But if you’re going to open your mouth you should say something that’s real.

You write two TV shows Grey’s Anatomy and Scandal, and you produce another, How to Get Away with Murder. And now the book. How do you come up with that many ideas? I don’t think about that, because if I focused on where my ideas came from, I feel like somehow they would stop.

You write a lot about the character Cristina Yang on Grey’s Anatomy. Is it because of all your characters, she was most like you? These days I’m probably more like [Scandal’s] Olivia [Pope] than I am like Cristina. But there was a moment when Cristina was very much a reflection of who I was.

You describe yourself as scarily, psychotically competitive. Is that what you need to be to succeed? I don’t think that my job requires me to be competitive at all. I’m in my office by myself or I’m in my writers’ room with my people. I’ve chosen a job in which there’s no competition allowed. It’s probably best for everyone.

You devote a chapter to your nanny, and you thank the five other members of your household staff. Why are working women ashamed to acknowledge that they have help? People don’t want to acknowledge it. The people who work in my home were there at different times during the writing of the book. It’s because you feel like—isn’t that funny? I literally just did it! I just said, “I don’t have five people …” Nobody wants to admit they have help. We’ve been conditioned to believe it’s wrong. I’ve decided that more important than me cooking brilliantly, is spending time with my children.

You have said that you did not break any glass ceilings. How can that be true? I did not feel like I had come up against obstacles. One, because my parents raised me to believe that there weren’t any. If you believe that there are obstacles, that’s why there are obstacles. And two, because I came along at exactly the right time in history. There were already women running shows. There were already people of color who had shows. That glass ceiling had been cracked just enough so that when I hit it, it shattered.

So when women or people of color talk about obstacles in Hollywood, are they not there? I’m pretty oblivious. That obliviousness makes it possible for me to move forward despite what anybody else is thinking. That doesn’t mean that obstacles don’t exist for other people. It’s just that I’ve decided that they don’t exist.

You’re a political junkie. What’s interesting you at the moment? The turmoil inside the Republican Party. It’s one of the reasons why the President in Scandal is a Republican.

Oh, come on. You could venture a guess as to who the Democrat candidate might be. Actually I don’t want to say. I’m not going to venture. I mean, I would be very excited for us to have a First Woman president. I think Hillary is amazing. But I don’t want to venture a guess because I always feel like that — I’m fairly superstitious. I feel like you’re jinxing. And I always think about how at this moment in time last time, nobody thought that Obama was going anywhere.

Were there any that surprised you? None. When I went into these difficult conversations knowing what my line was going to be, whether it was a business, personal, or parental conversation, the conversations became even easier, because I’d walked in with absolutely no sense of anxiety, because I’d already made all those decisions.

Tell me about what you call the Airplane Seat Belt Incident of 2014. Getting on a plane and discovering that your seat belt won’t fit around you was a moment of extreme horror. It was very hard to ignore.

Do you have any regrets about killing off McDreamy? I don’t ever regret a story that we tell.

The characters across your shows have this way of talking thoughtful sound bites, like “Love me”, “Pick me”, “Choose me.” Is that the way you talk? I have no idea. I get asked this question a lot lately, and it makes me nervous, because I’ve never paid any attention to the way my characters talk They speak the way they speak, and if I examine it too hard, I feel like somehow I’m going to not be able to allow them to speak at all.

You seem 100% sure that you never wish to get married. Why does single life appeal to you? I’m a full believer that marriage is a beautiful, beautiful thing for people. But I think it is a lot of work. And my imagination is so active, I suppose, I can spend so much time alone and never even feel lonely. I’ve talked to other writer friends of mine who feel the same way, other painter friends of mine who feel the same way, scientist friends of mine who feel the same way, and it’s how I started to think of Cristina Yang; that idea of having a genius that exists sort of outside, as Elizabeth Gilbert talks about. And that feeling is very fulfilling. I would have to take some time away from that in order to put into a relationship. While I like to date and I like to have a boyfriend and I want him to live across the street, I’m not sure that I’d want to be married in the sense of what it would require from somebody who believes in traditional marriage. Maybe nontraditional marriage would be great.

But—if I can probe a bit—all your writing is about one thing, which is being alone. Are you afraid that if you got married you might lose your understanding of what it is to be alone? That’s interesting. I don’t know. I do say all I’ve ever written about is being alone. And most people take that as, “Oh, that’s so sad.” And I always say, “No. No, all I ever write about is being alone, and sometimes that’s a beautiful, beautiful thing.”

What if one of your kids came to you and said, “We’d like a dad.” Would that sway you? No, because you can’t go out and buy one.

You’re a big fan of wine. Do you have a favorite bottle at the moment? There’s a ton of wine in my office right now. And right I don’t drink any wine. In losing weight, my taste buds changed. Wine tastes awful. Now all I want is like fish and soup. I don’t like it at all.

Are you more proud of introducing the phrase, “Vajayjay” or “Poped” into the lexicon? I don’t know if either is necessarily something to be proud of. I would have to say vajayjay because if it gets more women to actually speak of, talk about, think about, deal with their body parts, then that is a good thing.

What’s Shondaland working on right now? We have six or seven other projects right now that we’re developing, none of which are written by me—which I’m very excited about—but by other writers, many of whom have sort of come up through the ranks of Shondaland, who have been writers on Grey’s or Scandal or Private Practice or How to Get Away with Murder that we’re developing shows with this season that we’ve very excited about and we’ll see what happens. This is our biggest year of development yet.

You have an interesting way of working, right? You’re a show runner, but you are also the writer, and you have a non-writing partner. Am I right about that? Yeah, Betsy’s a non-writing producer, and because we have so many shows, it sort of morphs and changes over the years. You know, we had one show and Grey’s felt huge and exhausting. The two of us did a lot together. Now that’s it’s sort of morphed into many shows, I really do Grey’s and Scandal, and Pete does How to Get Away with Murder, and Betsy really oversees that and then does a lot of the business-y stuff. And then we have all of this really great development that Betsy is really hands-on in making sure that that’s happening. And then sometimes we just switch. Like I say, “I can’t do any more of this thing.” And she says, “O.K., I’m going to go down to the editing room and look for you.” So it just morphs. And I say, “I’m going to go sit with all the development and talk about something.” It depends on where our heads are at. The only things that stay specifically mine are the writing and the writers room.

Pretty much all your dreams have come true. What does it feel like? It feels like nothing. Life is still exactly the same. But it does allow you to take a moment and say, “Who do I want to be? And am I the person I thought I was going to be?” 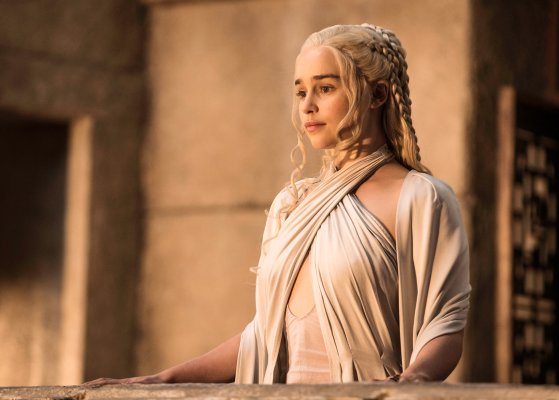