How Airbnb Plans to Become a Worldwide Political Organizer

On the heels of a ballot victory in San Francisco, Airbnb announced Wednesday that it would launch scores of home-sharing “clubs” in cities around the world, creating a grassroots army to take on opponents in future battles.

The announcement came one day after voters in San Francisco rejected a controversial ballot measure that Airbnb spent more than $8.5 million to oppose. Proposition F, which would have limited and more highly regulated home-sharing, was defeated by a 55% to 45% margin.

“San Francisco is where our community evolved into a movement,” Chris Lehane, Airbnb’s global head of policy, told reporters as he explained the “lesson from San Francisco” at the company’s vaulted headquarters. “Our hosts and guests organized themselves and became a political force.”

To continue building that momentum, Airbnb plans to establish 100 independent home-sharing clubs by the end of 2016, each ready to fight hotel lobbies or “NIMBYs” wherever officials propose home-sharing rules that hosts and guests don’t like.

Read More: Debate Over Airbnb Rages in San Francisco Ahead of Vote

Lehane, a seasoned Beltway strategist and former Clinton aide, did not provide estimates of what establishing or supporting the clubs—which he compared to the guilds of tradesmen that start forming in the Middle Ages—would cost, but he did lay out the broad strokes of this new political effort of the $24 billion company. While the clubs will be run “by the people, for the people,” Airbnb plans to provide training for their organizing efforts, dedicated staff to help them advocate and an external organization that will help provide them resources.

Though members of the clubs might home-share through any platform, be it Airbnb or Homeaway or VRBO, and though Lehane emphasized that Airbnb won’t expressly direct the hosts and guests but rather act as a “catalyst” for an “organic” movement that is already burgeoning in some cities without the company’s help, the announcement seemed like a shot across the bow of lawmakers or lobbyists who might try to take on the leader in this field. Throughout the conference, Lehane repeated statistics meant to show the political size and force of the company’s 4 million users in the U.S, comparing the “formidable constituency” to the number of members in the NRA, Sierra Club and teachers in the National Education Association.

Nearly 140,000 of those people are in San Francisco, where the ardent among them went door-to-door and business-to-business for weeks leading up to the vote, urging people to reject the proposition. While those pushing the measure believe platforms like Airbnb are contributing to the city’s housing crisis—by giving landlords an economic reason to hoard their rental stock from long-term tenants and rent it out to tourists—vocal, middle-class Airbnb hosts like Cathryn Blum argue that it is the revenue they get from home-sharing that allows them to make the rent.

Blum was invited by the company to take part in Wednesday’s conference, appearing much like a local business owner or teacher who joins a politician onstage as they campaign for office. “It’s keeping me afloat,” Blum said. “My home is my only asset, I want to monetize it the best we can.” 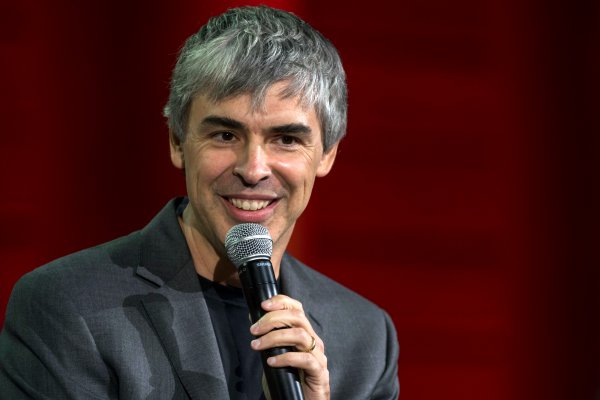 How Google Boss Larry Page Decides on His Next Big Bet
Next Up: Editor's Pick