Here's Where Republicans (And Some Democrats) Won on Tuesday

Republicans won several key races in the states Tuesday, including a stunning upset in Kentucky’s gubernatorial contest. The GOP held on to most offices in Mississippi and kept control of Virginia’s legislature.

The successes came even though Republicans spent less on average than Democrats on political ads to get out their message.

In Kentucky, businessman Matt Bevin was elected governor, only the second Republican to hold the position in more than four decades. He beat Attorney General Jack Conway by a margin of 53 percent to 44 percent.

There was some good news for Democrats in Pennsylvania, however. Democratic candidates for the Pennsylvania Supreme Court won all three seats up for election on the seven-person court.

Voters decided major races there and in four other states.

The Republican victories came despite a major advertising push by Democrats and the independent political groups that back them. Democratic-affiliated advertisers spent more than $155,000 on political ads on average compared with the $85,000 that Republicans spent on average in the mainly red-leaning states, according to a Center for Public Integrity analysis of data from media tracking firm Kantar Media/CMAG.

“The ad spending in these races can almost be like trench warfare,” said Kyle Kondik, a political analyst at the University of Virginia’s Center for Politics. “You put in a bunch of resources and the lines don’t move that much.”

Altogether, more than $73 million had been spent on TV airtime for 2015 state-level races through Monday, according to Kantar Media data. The firm monitors 211 media markets around the country. The figures do not include ads for radio, the Internet, direct mail or TV ads that air on local cable systems. The estimates do not include the cost of making the ads.

The win in Kentucky means that Republicans will hold the top job in 32 states depending on what happens in Louisiana. Voters there go to the polls on Nov. 21 to vote for governor. Republican David Vitter is behind in the polls.

Here’s how the races shook out:

Political advertisers spent the most money in Kentucky, an estimated $21.7 million, out of all state elections this year. More funds were poured into the governor’s race there than any other state elective office, roughly $16.6 million.

Conway spent nearly twice as much as Bevin on TV airtime to no avail.

“This race was less about money and more about partisanship and a growing Republican advantage in that part of the country,” Kondik said. “You also often see the party that lost at the presidential level winning these lower seats, like governorships.”

They will rule on the state’s court of last resort, which also helps redraw political boundaries after the U.S. Census, deciding what the future state legislature looks like.

It was the most expensive state supreme court race on record, according to the nonpartisan Brennan Center for Justice and Justice at Stake, advocacy groups that are highly critical of judicial elections. An estimated $10.8 million alone was spent on TV airtime.

And the race was decidedly partisan, with the Democrat-backing Pennsylvanians for Judicial Reform, the Republican State Leadership Committee and the Pennsylvania Republican Party buying an estimated $2.4 million, $850,000 and $7,900 in TV ads, respectively.

The GOP held control of the state Senate 21-19, as well as keeping a wide lead in the House. The races spawned thousands of ads, which cost more than $10.1 million.

No incumbents lost their elections and no seats flipped party control in the state Senate.

Both parties used this off-year election to experiment with campaign strategies and messages ahead of the 2016 presidential vote, where Virginia could change the game.

“Virginia will be one of the two or three states who will decide who the next president is going to be, so there is a greater interest paid in state politics,” said Quentin Kidd, director of the Wason Center for Public Policy at Christopher Newport University in Newport News, Virginia.

“Virginia has become the most competitive battleground in all of state legislatures,” said Tim Storey, election expert for the National Conference on State Legislatures. “It’s switched back and forth between both parties multiple times in the past five or six years.”

It was a day for incumbents in Mississippi, with Republican office holders winning re-election in major state offices, including the governor’s mansion where Gov. Phil Bryant handily beat a truck driver.

His Republican opponent, Mike Hurst, spent an estimated $680,000 on TV ads and was boosted by an estimated $78,000 in ads from the Public Integrity Alliance, a nonprofit based out of Arizona that focuses on attorneys’ general races. But Hood dominated the airwaves with nearly twice as many ads, spending over $1 million.

Although most of the state’s assembly seats weren’t competitive and Democrats already held the majority, the liberal leaning General Majority PAC poured an estimated $3.1 million into election ads, more than half of all spending in the state and well above any individual candidate.

Most of General Majority PAC’s funds come from Garden State Forward, a PAC created by a major teachers’ union in New Jersey. 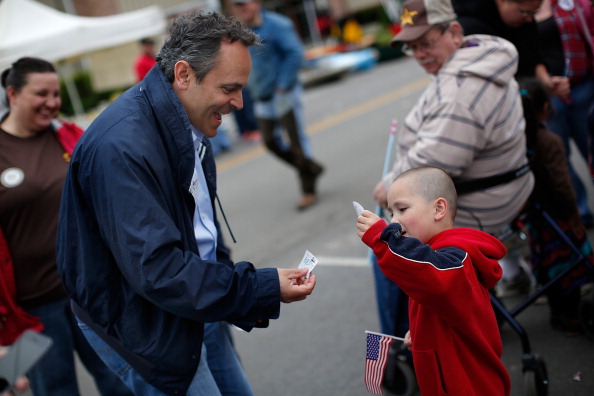 What This Week's Elections Tell Us About 2016
Next Up: Editor's Pick