We Must Honor the Legacy of the Higher Education Act

A student of mine, thrilled to be graduating this December, recently wrote to me about the challenges he had faced earlier in school. Diagnosed with a learning disability in math, he’d been told by a fifth-grade teacher that he would never go to college.

He refused to be discouraged from achieving this goal. He worked hard and graduated from high school, doing well enough to be admitted to the University of Maryland, Baltimore County (UMBC), a selective research university where I am the president. He’s now completing a degree in communications. “I have overcome and beat the odds,” he wrote.

The story of this young African-American man is inspiring and speaks volumes about what we have achieved as a country. Fifty years ago, most Americans would not have expected to go to college, and only about 10% of adults held bachelor’s degrees. African Americans had fewer examples of college success, with a mere 4% of black adults holding such degrees.

This new reality has everything to do with changes in public policy that took root during a dynamic period in the 1960s. When President Lyndon B. Johnson signed the Higher Education Act into law on Nov. 8, 1965, he built on the vision of equality and democratic participation that motivated such legislation as the Voting Rights Act, which became law months earlier, and the Civil Rights Act of 1964.

Though the Higher Education Act was a wide-ranging bill, its most enduring legacy is a framework to provide the financial support for students from low-income families to attend college. This commitment to supporting young people from all backgrounds sent a clear message that America recognized the importance of social mobility and a well-educated citizenry.

Yet for many people, the Civil Rights Movement and Johnson’s Great Society initiatives are paragraphs from history books, understood vaguely, if at all. My students often ask me about this period and about my experiences growing up in Birmingham, Ala., at a time when black children like me could not attend the better-resourced schools and were forced to used separate—and unequal—public facilities.

When the Higher Education Act became law in 1965, I was a 15-year-old preparing to graduate from my segregated high school and attend college. I remember feeling both excitement and fear at a time when people were standing up to confront racism and hold the country to its promise of equality.

Yet resistance to change was intense. Only two years earlier, I had joined hundreds of other children to march through the streets of my hometown with Dr. Martin Luther King Jr. and other civil rights leaders. I was arrested and spent five terrifying days in jail. That fall, four of my classmates were killed in the bombing of the 16th Street Baptist Church.

The intensity and pain of those experiences gave way in time to a new sense of hope. The world did not have to remain as it was.

The changes in the past 50 years have been profound in many ways. Most parents in the ’60s would not have expected that their children would have the opportunity to earn college degrees. I was very fortunate to have a mother and father who had both attended college. Despite that privilege, I could not have imagined then that I would one day be president of a predominantly white university. Like many blacks, I had never had a conversation with someone white.

Today, according to a 2011 Pew Survey, 94% of parents believe their children will go to college. This new and expanded sense of possibility is important. My student who will graduate shortly was motivated to overcome his learning disability and other obstacles in large part because he grew up in a world in which he’d seen people who look like him achieve their dreams.

“Hold fast to dreams” is the first line of a Langston Hughes poem that I often share with my students; the words also inspired the title of my recent book. The challenge we face today is that too many young people have given up on their dreams, or have never been given the space to develop them. In 2013, for example, while 77% of young people who grew up in families from the highest income quartile had graduated from college by age 24, only 9% of young people whose families are in the bottom quartile had done so.

Students from low-income backgrounds often face a range of challenges long before they think about applying to colleges. Their parents may not have attended college, and they often lack access to strong schools or role models. They are also more likely to have been raised in unstable settings; many living in urban areas contend with the dehumanizing force of routinized violence. Even those who do well on standardized tests and college-entrance exams are much less likely to complete degrees. According to one study, despite similar test scores, only 41% of students from low-income families graduated, compared to 74% of students from high-income families.

We must do more to support America’s youth. We can start by working to understand students from different backgrounds and the particular challenges they face. At UMBC, we’ve developed a model focused on building community among students, providing them access to mentors, setting high expectations, and continually evaluating what works. We use this model in working with first-time juvenile offenders in our Choice Program, with prospective STEM teachers for Baltimore schools in our Sherman Program, with diverse students preparing for careers in research science and engineering in our Meyerhoff Program, with students focusing on social and urban challenges in our Sondheim Program, and with girls and young women through our Center for Women in Technology.

On signing the Higher Education Act, President Johnson talked about having made up his mind that the “nation could never rest while the door to knowledge remained closed to any American.” Indeed, the law started a process of transformation. I often think about a conversation I had several years ago after giving a speech to a school board association in a southern state. My talk, which focused on challenges we face as a nation, traced my development as an educator back to my experiences in the ’60s.

Afterward, a school board leader, the CEO of a local company, told the audience about his own background. When people think about the Civil Rights Act or the Higher Education Act, he said, they tend to think it benefited “other people” —minorities or women, not white men like him. People, he continued, just assumed he came from money.

Not true, he said. His mother had been a sharecropper and his father had died. In the late ’60s, his mother saw black children going to college and said she wanted her children to have that chance as well.

The Higher Education Act, he said, allowed him to complete college, and it transformed his future.

His story, like that of my student and those of millions of other Americans, gives me hope at a time when despair and cynicism are becoming too common. As I tell my students, the work has just begun; we have much more to do.

Freeman A. Hrabowski, III, a TIME 100 honoree, is the president of University of Maryland, Baltimore County. His book Holding Fast to Dreams: Empowering Youth from the Civil Rights Crusade to STEM Achievement was published in May. 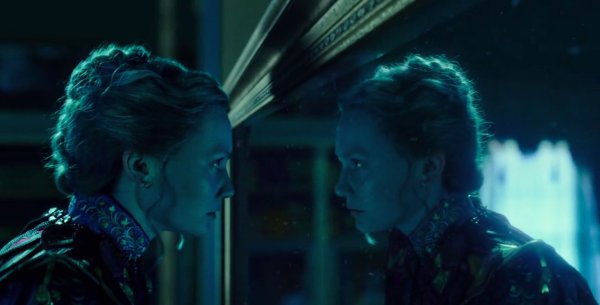 Watch the Trippy New Trailer for Alice Through the Looking Glass
Next Up: Editor's Pick