New Jersey Gov. Chris Christie is far from the top tier of Republican candidates, but it would be hard to tell from his campaign events or frequent appearances on cable news.

In the wake of Jeb Bush’s debate slide and Donald Trump’s fall from first place in national polls, the brash Garden State governor is more aggressively putting himself forward as the GOP’s other tough guy. Running on experience and his own talent, Christie has sought to capitalize on their troubles and position himself as an alternative to surging Sen. Marco Rubio.

“Nobody cares about whether Jeb speaks English or Spanish,” Christie said Tuesday night on Fox News, arguing voters want a candidate who speaks about the issues that matter to them. “Nobody cares about Donald Trump and how much money he made or how many times he’s lost money.”

At an over-capacity town hall Friday at the Glory Days bar in Council Bluffs, Iowa, Christie held court for 102 minutes, tackling questions on the federal debt, national security, and reforming healthcare. But he opened by trying to exploit the void created by Bush’s polling collapse among establishment and business-minded Republicans.

“She’s not going to be a pushover for anybody,” he says in Council Bluffs of Hillary Clinton, adding the GOP needs someone “who is ready, who has been tested.”

Christie has stepped up his efforts to draw contrast with Trump and the senators in the race, placing even greater emphasis on his frequent trumpeting of his record as governor, speaking passionately about his efforts to reform his state’s drug laws and efforts to reach across the aisle to Democrats.

The “tested” narrative is a direct challenge to the fresh faces on the political stage. Indeed, few in the GOP field have been tested quite like Christie—to mixed effect. “I have had many near death experiences and I’m still alive,” he said, alluding to his longevity through the scandal known as Bridgegate that turned him from a front-runner to nearly an also-ran overnight.

Christie still gets asked about the affair, in which senior aides were allegedly involved in the politically motivated closure of approach lanes to the George Washington Bridge months before his re-election in 2013. He maintains his response—firing the offenders immediately, facing the press for two-hours, and cooperating with investigators—was a sign he’ll accept accountability.

“I have been tested every way a politician should be tested,” he adds, arguing he has succeeded in the “most aggressive liberal media market” in the nation.

In Iowa and New Hampshire, Christie has assembled scrappy teams of younger, well-connected operatives. While paling in size to the Bush operation in Iowa–the largest in the state—Christie locked in more than two-dozen precinct captains for the Feb. 1 caucuses during his two-day swing last weekend alone, outpacing Bush, according to a leaked internal document. Their strategy hinges on converting a better-than-expected showing in Iowa into victory in New Hampshire, where Christie is at just 5% in the polls.

But there are signs of movement: In New Hampshire, Christie’s favorability in now 10 points higher than Bush’s—a continuation of steady gains overs the last several months—as more Republicans become open to supporting him. And in Iowa, aides are seeing increased interest after his debate performances.

As his rivals complained about the debate moderators, Christie became the most aggressive critic of his opponents for fixating on the way CNBC conducted last week’s debate. While agreeing questions were “unfair,” he has repeatedly argued said the attacks on the moderators betrayed his rivals’ unpreparedness for office.

“I just think that’s it’s now three times in a row that I’ve done better at the debates,” Christie told TIME of his new confidence. “I’ve done well every time and I think that tells people something—what it tells them is I’m the most tested and ready and mature candidate to run against Hillary Clinton. And I think every debate we have will prove that more and more.”

Christie is not the only candidate preparing to capitalize on Bush’s slide. Ohio Gov. John Kasich now says he is “ramping up” his efforts in Iowa—a state he ignored for more than a month—as he and Christie compete on near-identical paths as Bush alternatives. 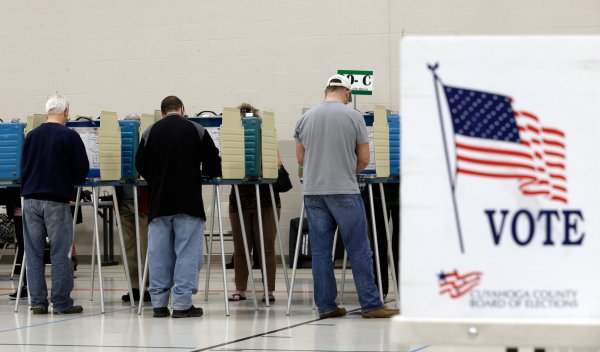 Ohio Says No to Pot
Next Up: Editor's Pick