GoldieBlox, the girl-focused building toy company famed for its viral Rube Goldberg machine ad, is back with a new action figure. Yes, it’s an action figure — don’t even think about calling Ruby Rails a doll. In a new video, the science-savvy superhero (named for the programming language) subs in for canonized male heroes, like James Bond and Marty McFly, to the tune of “I Need a Hero.”

“The most iconic action heroes are almost always men,” says Debbie Sterling, creator of GoldieBlox. “Boys grow up with superheroes, and girls grow up with damsels in distress who are saved by those superheroes. Those stereotypes become how kids identify with their own gender.” Enter, Ruby and Goldie wearing suits and shades as Women in Black.

Sterling hopes Ruby’s first video will experience the same level of success as past GoldieBlox ads, the first of which took the Internet by storm in 2013 and eventually won a spot as a 2014 Super Bowl commercial. Ruby comes equipped with a laptop (which she uses to code) and a parachute that kids can construct following basic engineering principles. Sterling wants to build girls’ interest in STEM (science, technology, engineering and math), which has been her main mission since she thought of the toy after graduating from Stanford with an engineering degree. But in this new ad she’s also set out to inspire girls to imagine themselves as the stars, not the sidekicks, of their own story.

Though the female hero is finally starting to take the box office by storm—the final Hunger Games movie starring Jennifer Lawrence and the new Star Wars film featuring a female protagonist played by Daisy Ridley will likely be among the holiday season’s biggest blockbusters—Hollywood still has a long way to go when it comes to creating role models for young girls. Just 12% of protagonists in major Hollywood films last year were women, and male speaking characters outnumbered female ones three to one, according to data from San Diego State University.

Perhaps more to the point for GoldieBlox’s launch of its first African-American action figure, just six of the top 500 films of all time have starred a woman of color.

“It’s really important to me to show diversity in the GoldieBlox characters because I want every kid to be able to look at GoldieBlox and see themselves,” says Sterling. Indeed, one of the main criticisms of the small toymaker has been its main character’s look. Sure, GoldieBlox’s 2012 Kickstarter campaign featured Goldie’s two best friends—Ruby Rails is African-American and Valentina Voltz is Hispanic—but Goldie was the nominal hero. And though Goldie’s hair may be messier than Barbie’s coiffed ‘do, it is still blonde.

“I made Goldie blonde because her name was Goldie, and she was sort of inspired by my little sister who always had the whitest, curliest, crazy blonde hair,” Sterling says. When the creator spoke to TIME in 2013, she also suggested Goldie’s hair color was meant to disrupt stereotypes about blondes’ intellect.

But Sterling quickly realized the importance of rolling out another figure and promoting the idea that non-white girls can pursue STEM too. “We spent about two years creating this action figure—just painstakingly going over every detail from the shape of her face to her hair to making her truly have authentic African-American features. It wasn’t about just taking a white doll and changing the skin tone,” she says.

Like Goldie, Ruby defies the fashion doll look popular among the Monster High and Bratz dolls. “Some of the feedback I received from toy industry veterans was if you want this doll to sell, she has to have straight, shiny, black hair. We specifically went against that because we wanted little girls to really see a doll that looks like them,” says Sterling.

She hopes Ruby will spark a conversation about how minorities are still woefully underrepresented in STEM fields. In 2012, just 4% of doctorate degrees in science and engineering were awarded to non-white women.

MORE: Cracking the Girl Code: How to End the Tech Gender Gap

Studies have shown that what toys kids play with affects their interests and ambitions and that the dearth of STEM toys for girls has taken its toll. Toymakers like Sterling hope that these science and math toys will help girls develop an early interest in STEM careers: A 2009 poll by the American Society for Quality of children 8 to 17 found that 24% of boys were interested in engineering careers while only 5% of girls were.

GoldieBlox has already begun to change the way society thinks about girls and science. In the last three years, it has helped spur a revolt against the “pink aisle” in toy stores—the space dedicated to girls that is always filled with fashion accessories but rarely with STEM toys (save the occasional chemistry kit for creating makeup). Chains like Target have begun to forgo the “pink” and “blue” aisles in favor of just labeling its sections “toys” in hopes that parents and kids will feel more comfortable browsing dolls for boys and construction toys for girls. Meanwhile, other STEM-related dolls, like the science-oriented but fashion-forward Project MC2 dolls, have proliferated. Even Barbie got in on the Silicon Valley game last year (and, since action heroes and scientists don’t generally wear heels, flat feet!).

Read Next: Sandra Bullock Is Glad Hollywood ‘Got a Spanking’ Over Gender Pay Gap 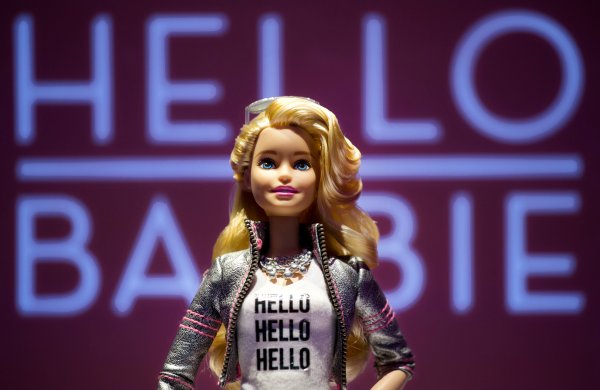 This Advocacy Group is Saying 'Hell No' to 'Hello Barbie'
Next Up: Editor's Pick