Warren Buffett was picking out stocks at 11 years old — and he amassed the equivalent of $53,000 in today’s dollars by the time he was 16.

Today, the 85-year-old investing legend has an estimated net worth of over $70 billion, according to Forbes, making him the third richest man in the world.

Inspired by a Quora thread asking “What are some mind-blowing facts about Warren Buffett,” we rounded up astonishing facts about the “Oracle from Omaha” and his massive amount of wealth:

1. While his elementary school classmates were dreaming about the major leagues and Hollywood, 10-year old Buffett was having lunch with a member of the New York Stock Exchange and setting life goals.

Buffett’s legendary career all began with an epiphany at age 10 when he was on a trip to New York City with his dad.

Dining with a member of the NYSE planted the idea in young Buffett’s head to organize his life around money. [Business Insider]

3. When Buffett was a teen, he was already raking in about $175 a month — more than his teachers (and most adults).

He pulled this off by dutifully delivering the Washington Post. [Business Insider]

Paper delivery was just one of many small businesses teenage Buffett orchestrated: He sold used golf balls and stamps, buffed cars, set up a pinball machine business, and turned a horse track into a lucrative playground. [Business Insider]

5. He was rejected from Harvard Business School.

Buffett, confident he nailed his admissions interview, had already told a friend, “Join me at Harvard.”

“I looked about 16 and and emotionally was about nine,” he recalled of the in-person interview. Forced to look elsewhere, he settled on Columbia University, which only required a written application and no interview. [Business Insider]

6. His idol refused to hire him the first time he applied.

Buffett originally wanted to work with his idol, and author of “The Intelligent Investor,” Benjamin Graham, but Graham rejected him.

Buffett wouldn’t take no for an answer, and continued pitching Graham ideas until he eventually hired him. [James Altucher]

He was 21 and terrified of public speaking. It ended up being a worthy investment, as the course helped him propose to his wife. [Business Insider]

If you want to be Buffett’s neighbor, the house across the street will cost you about $2.15 million. [James Altucher]

9. Buffett doesn’t keep a computer on his desk, and he chooses to use a flip phone rather than a smartphone.

There is, however, a World Book Encyclopedia set on his shelf. [James Altucher, Business Insider, CNN]

10. In fact, he’s only sent one email in his life, to Jeff Raikes of Microsoft. [CNN]

11. His distance from technology leaves him time for bridge, which he plays about 12 hours a week.

When he’s not playing bridge, he’s reading. “I just sit in my office and read all day,” he says. [The Week]

13. He drinks an alarming amount of Coca-Cola each day.

The business magnate is a notoriously unhealthy eater: “If I eat 2,700 calories a day, a quarter of that is Coca-Cola. I drink at least five 12-ounce servings. I do it everyday.”

He also likes to double-fist salt shakers, and don’t put it past him to enjoy a bowl of ice cream for breakfast. [Business Insider]

15. Among investing legends, Buffett has the longest track record for beating the market.

The longevity of Buffett’s outperformance is greater than that of other savvy investors, such as David Einhorn and Walter Schloss. [Business Insider]

16. $1,000 invested in Buffett’s Berkshire Hathaway stock in 1964, when Buffett took over the company and shares cost just $19, would be worth about $11.6 million dollars today. [Business Insider]

17. Buffett’s net worth is greater than the GDP of Uruguay.

18. Buffett has so far donated enough money in his lifetime to build four Apple ‘Spaceship’ Campuses, which are $5 billion endeavors.

The Apple Campus, one of the last major projects Steve Jobs worked on, is a futuristic-looking company campus that will feature curved glass panels, an underground parking lot, a private auditorium for keynotes and product launches, and a 360-degree view of nature.

Buffett has donated a lifetime total of $20 billion — the second-highest amount (following that of Bill Gates). [Forbes]

According to Forbes, Jennifer Lawrence was the second-highest-paid actress in 2013, and she is estimated to have made $34 million that year.

20. The multi-billionaire reportedly earns only $100,000 a year at Berkshire Hathaway — and spends it frugally. [GOBankingRates]

21. People are so fascinated with the legendary Buffett that they’ll spend millions of dollars to eat lunch with him.

Buffett has been auctioning off a “power lunch” since 2000 at his charity event for GLIDE Foundation.

The highest bidder gets to bring up to seven people to dine with the steak-loving business magnate at Smith & Wollensky steakhouse in Manhattan, and the most recent winner paid $2,345,678. [Reuters]

22. He doesn’t think money equals success: “I measure success by how many people love me. And the best way to be loved is to be lovable.” [James Altucher]

Read next: Warren Buffett Does These 3 Things Way Better Than You 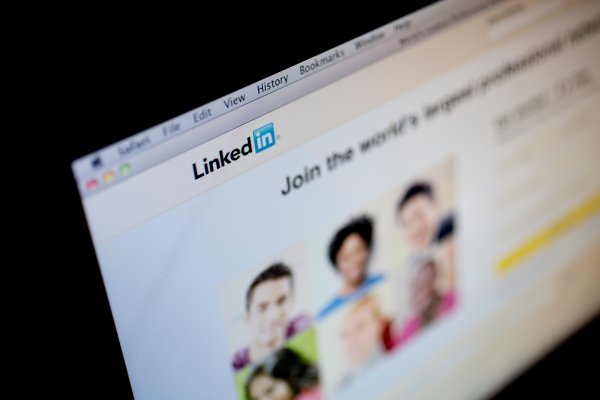 8 Ways to Find a Job Using LinkedIn
Next Up: Editor's Pick