Self-driving cars are getting into accidents at a higher rate than cars driven by humans, according to a new study. However, the new research comes with a laundry list of caveats that indicates that transportation experts are still struggling to ascertain just how safe self-driving cars actually are.

The study, by researchers Brandon Schoettle and Michael Sivak at the University of Michigan’s Transportation Research Institute, found that self-driving cars are in accidents at five times the rate of human-controlled cars. However, people often don’t report minor accidents to police. When controlling for that fact, self-driving cars are still twice as likely to get into accidents as regular cars.

The study aggregated data from the self-driving cars being operated by Google, Delphi and Volkswagen. Their vehicles have logged 1.2 million miles traveled, compared to the trillions of annual miles logged by regular cars, according to the study. With a larger data set, it’s possible that the accident rate could be substantially higher or lower.

Still, the data illustrates some early trends. Most of the self-driving vehicles involved in accidents were hit in the rear when they were traveling 5 miles per hour or slower. None were involved in very serious accidents, such as head-on collisions. Google has repeatedly said that the accidents its self-driving cars have been involved in were the result of human error. But self-driving cars’ inability to bend or break traffic laws, as human drivers regularly do, could make their driving habits surprising to others on the road, leading to crashes. 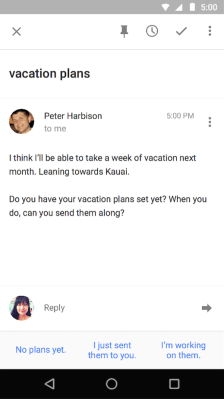 Google's Email App Can Now Suggest Responses For You
Next Up: Editor's Pick