Philip Pullman's 'His Dark Materials' to Be Adapted for TV Series

A new drama series based on the trilogy His Dark Materials is in the works, BBC One announced on Tuesday.

The network has commissioned a TV adaptation of Philip Pullman’s epic set of fantasy novels Northern Lights, The Subtle Knife, and The Amber Spyglass, to be produced by Bad Wolf and New Line Cinema. The series was last adapted to the big screen for the 2006 New Line film The Golden Compass, starring Nicole Kidman, Daniel Craig, and Dakota Blue Richards.

“It’s been a constant source of pleasure to me to see this story adapted to different forms and presented in different media,” says Pullman in a statement. “In recent years we’ve seen the way that long stories on television, whether adaptations (Game of Thrones) or original (The Sopranos, The Wire), can reach depths of characterization and heights of suspense by taking the time for events to make their proper impact and for consequences to unravel.

“And the sheer talent now working in the world of long-form television is formidable. For all those reasons I’m delighted at the prospect of a television version of His Dark Materials. I’m especially pleased at the involvement of Jane Tranter, whose experience, imagination, and drive are second to none. As for the BBC, it has no stronger supporter than me. I couldn’t be more pleased with this news.”

Jane Tranter, executive producer for Bad Wolf, says, “It is an honor and a joy to be part of the team responsible for bringing Philip Pullman’s trilogy of novels to the BBC. Ever since they were first published these books have been a huge influence on so much of my thinking and imagination and it is enormously inspiring to be now working on them for television adaptation.”

The trilogy tells the story of orphan Lyra, who stumbles upon a sinister plot when she sets off to recover a kidnapped friend. Lyra is joined by Will, a boy with the ability to cut through worlds. Together, they discover a prophecy about her own destiny and are thrust into a war across multiple worlds.

Since the first publication of Northern Lights in 1995, the His Dark Materials series has been published in more than 40 languages and has sold worldwide close to 17.5 million copies. In 2001, The Amber Spyglass was the first and only children’s book to win the Whitbread (now Costa) Book of the Year Award. In 2005, the Swedish Arts Council awarded Pullman The Astrid Lindgren Memorial Award, and Northern Lights won the Carnegie of Carnegies in 2007.

“It is an honor to be bringing Philip Pullman’s extraordinary novels to BBC One,” says Polly Hill, controller of BBC Drama Commissioning. “His Dark Materials is a stunning trilogy, and a drama event for young and old — a real family treat that shows our commitment to original and ambitious storytelling.”

His Dark Materials is the first commission from Bad Wolf, a U.K./U.S. production company founded by Jane Tranter and Julie Gardner and co-sited in South Wales and Los Angeles, and it marks New Line Cinema’s first move into TV production.

His Dark Materials will be executive produced by Philip Pullman, Jane Tranter and Julie Gardner for Bad Wolf, Toby Emmerich and Carolyn Blackwood for New Line Cinema, Bethan Jones for BBC One, and Deborah Forte for Scholastic. 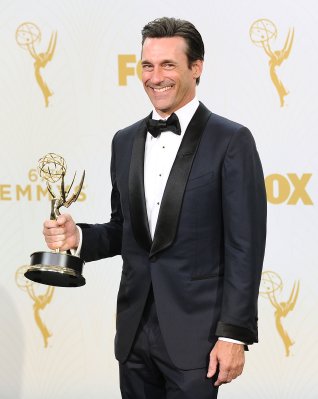 Jon Hamm and Amy Poehler Once Threw an Emmy Losers Party
Next Up: Editor's Pick