Why Obama's National Security Strategy Seems a Lot Like Bush's

“If the Bush years can be caricatured as government by cowboy, energetic but shooting from the hip, the Obama era was government by lawyer, methodical and precise —sometimes to a fault.” So observes New York Times investigative reporter Charlie Savage in Power Wars: Inside Obama’s Post-9/11 Presidency, which provides the most comprehensive account to date of the Obama administration’s approach to national security law and policy-making.

These are, indeed, caricatures drawn with exaggerated features, and Savage illuminates more complex pictures of both. He carefully documents key decisions while placing them in context of politics, personalities and ideological agendas. Overall, the story strongly implies that mainstream American politics don’t support fundamental rethinking of counterterrorism policies. As an alternative to sweeping change, incremental reforms and procedural adjustments under Obama have, while improving them, also normalized and legitimated some practices that many civil libertarians and allied governments find abhorrent.

For years, observers have debated whether the Obama administration’s approach to fighting al-Qaeda and its spin-offs has been a radical break with Bush’s or a smooth continuation of it. Covering a broad array of controversies including torture, secrecy, surveillance and detention, Savage details what many have already concluded: that with a few important exceptions Obama’s policies look much like the ones Bush handed off to him.

The Guantanamo population is down, but the camp and its special military courts remain open. Obama retained vast National Security Agency surveillance programs and instituted only modest reforms after the Snowden disclosures. The Justice Department still shields state secrets from court review while it has cracked down on leakers. True, an executive order now bars harsh interrogation (which the Bush administration had already stopped), but at the same time the Central Intelligence Agency ramped up drone killings up under Obama.

The more novel contribution of the book, beyond demonstrating this policy continuity, is explaining its causes. Was it a result of the Obama administration’s pragmatic response to its evolving perception of threats, for example, or was it the result of Republican attacks and congressional resistance? Both played a role, Savage shows, but Obama and his team also brought a philosophy and approach to reform that sustained many controversial practices they inherited.

A central insight of the book is that there were two main legal critiques of the Bush-Cheney War on Terror—what Savage calls a civil liberties critique versus a rule of law critique. One held that after 9/11 the government had struck poor balances between rights and security. The other held that the government had gone about striking those balances in the wrong way, by acting unilaterally, circumventing normal vetting processes and insisting that the president could act free of congressional and judicial checks. This distinction is important to understanding why counterterrorism policy now looks similar to the policy in place when Obama took office.

Savage shows that the latter view dominated thinking inside the Obama administration and inside Obama’s own head. With some exceptions, such as interrogation limits, Obama and many of his key advisers wanted not to dismantle the War-on-Terror apparatus but to put it on sounder legal footing. Whereas a prevailing camp in the early Bush administration saw the War on Terror as an opportunity to free the president of improper and dangerous restrictions, the Obama counterparts sought to nest security policies in legitimate and reasonable constraints. Some of the rule-of-law problems had already been addressed by the end of the Bush administration, through reforms imposed by Congress and the Supreme Court or initiated within the executive branch (I worked on some of the latter). The Obama administration would try to remedy other rule-of-law problems by acknowledging legal limits, formalizing internal reviews and bolstering oversight systems.

This book looks back at Obama’s decision-making, but it carries implications for the future. From a legal perspective, Obama will leave behind powerful precedents—precedents that help entrench some of the very policies that many voters expected him to repudiate. While trying to close Guantanamo, for example, his administration successfully defended it in court, winning formidable judicial rulings that support detentions without trial. While pledging respect for Congress’s constitutional role in authorizing force, future presidents will point to Obama’s unilateral intervention in Libya to support their own military adventures.

From a political perspective, Obama’s image as a deliberative and reluctant commander-in-chief give his actions and their justifications extra credibility upon which future presidents can rely. His critics cannot so derisively dismiss claims that we’re still waging a borderless war with al-Qaeda as merely a pretext to aggrandize the presidency. And skeptics cannot discard legal memos and policy procedures for targeted killings as efforts to skirt normal checks and exclude dissenting voices (though Savage could have done more to highlight some surprising cases of procedural irregularities). This book’s rich account of how and why Obama reached his decisions therefore contributes to the potency of his legacy. 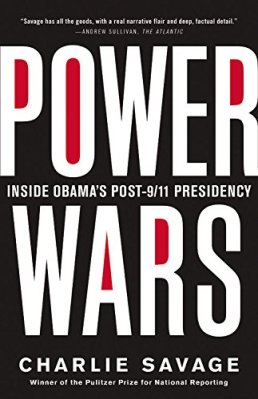 Inside Obama's 'Government of Lawyers'
Next Up: Editor's Pick