Shopkeepers Revolt Has Mafia On the Run in its Sicilian Heartlands

The Italian media have called it “the Shopkeepers Revolt” after 36 shopkeepers and businessmen turned against mafia racketeers in the town of Bagheria, ten miles from Palermo. On Monday police issued arrest warrants for 22 mafia suspects. Police say that this level of community cooperation against the mafia is unprecedented; never before in Italy have so many shopkeepers rebelled against the mafia in one go.

Police in Palermo said they issued 22 arrest warrants for mafia chiefs and their henchmen. A number of them were already behind bars and there was no immediate information on how many were still on the run. The list features names of mafia bosses, well known in Sicily, such as Gino Di Salvo, Nicola Eucaliptus, Onofrio Morreale and Gino Mineo. All are believed to be connected to Bernardo Provenzano who was arrested in 2006 and is considered to be the last big boss of the Sicilian mafia.

“The investigation … shows the suffocating pressure of extortion exercised by the most feared mafia chiefs, who from 2003 to 2013, took charge of the top ranks of the mafia organization,” according to the police statement.

Colonel Salvatore Altavilla, the chief investigator says the investigation has been a major success: “This operation demonstrates that the people of Sicily are tired of the Mafia. They’re tired of being ground down by its arrogance.” Altavilla says that the businesses in Bagheria “had plucked up the courage” to provide details about mafia activities that had touched on everything: from construction to the selling of fish, furniture and clothes shops, bars, amusement arcades and betting shops. Every business in Bagheria had to pay monthly rates ranging from 1,000 to 5,000 euros ($1,100-$5,500). Builders were subject to a mafia “tax” of 3% on all commissioned work.

The businessmen and shopkeepers, all male, are now under police protection. The mafia are renowned for killing people for informing the police about their actvities but in extortion they normally destroy the business by burning down the premises.

The investigation began 2 years ago when three victims reported mafia extortion to the Palermo police. They were later joined by a further 33 victims. Domenico Toia had a lighting business and a restaurant in Bagheria but tired of paying extortion money to the mafia. “My father had the courage to rebel,” says Tommaso Toia, 40, the son of Domenico, “unfortunately he was unable to relish this victory for long. He suffered a fatal stroke last June. He had been poorly for some time. Since being overwhelmed by debt, harassed by the mafia who wanted that money each and every month, he fell into depression. He lost 50 kilos in weight. Now even after his death we have continued his battle. All of my father’s companies went bankrupt, today however we want to stand tall and persevere. We hope that others may follow our father’s example, and I’m sure he’s smiling down on us.”

The Bagheria businesses were helped by the Palermo-based anti-racketeering association Addiopizzo which has helps victims to report the mafia and provides them with legal assistance. Salvo Caradona, one of Addiopizzo’s managers says it has helped 150 people turn against the mafia: “Many of these people have turned to us. These people can’t take it anymore, many are scared and have been overwhelmed by debt. The mafia forces them to pay every month. If they don’t, the mob threatens to kill and burn their business down. And I must say that fear is slowly succumbing to an increased awareness of the fact that they are winning their battle against the mafia”.

Patrizio Cinque, the mayor of Bagheria says that the town has suffered at the hands of the mafia for too long. “Here in Bagheria the mafia has always been powerful. Perhaps more so than in other Sicilian towns. Now at last people can walk with their head high. If I were to imagine the end of the mafia, well it would be wonderful if it were to begin with the story of 36 entrepreneurs who one November day said no to the mafia.” 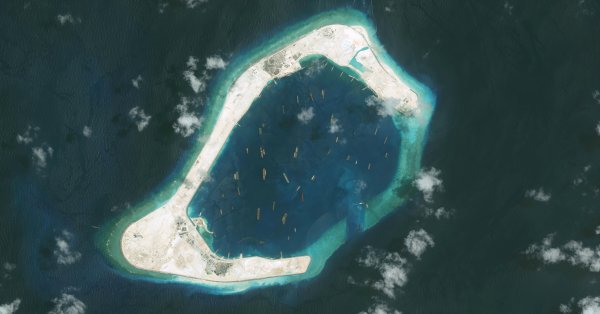 White House Says It Will Continue to Challenge China in South China Sea
Next Up: Editor's Pick