The Walking Dead Just Removed a Major Character From Its Credits

The Walking Dead is known for some serious cliffhangers and last week’s show was no different. It appeared that a major character had fallen victim to a pack of zombies, but it couldn’t possibly be true …could it?

Stop reading now if you aren’t caught up on this season of The Walking Dead and/or don’t like spoilers.

Last week’s show ended with delivery-boy-turned-badass Glenn Rhee at the bottom of a zombie pig pile, but there was a lot of doubt about whether he was actually dead. It looked like Nicholas (Michael Traynor) could have protected Glenn from the Walker attack, meaning that the best character on the show could have escaped a gruesome fate. That hope may have ended this week, though. Sunday’s show gave fans a major hint that Glenn is no longer among the living—actor Steven Yeun’s name was removed from both the opening and end credits. For many, that is confirmation that the fan favorite is really and truly gone.

However, last week The Walking Dead’s showrunner Scott Gimple offered a different take as he addressed the uproar on the after-show series, The Talking Dead. “In some way, we will see Glenn, some version of Glenn or parts of Glenn again, either in flashback or in the current story to help complete the story,” Gimple said. He didn’t go into details, but the phrase “parts of Glenn” is intriguing for fans eager to keep the character on the show, even as a zombie. So there may be hope–or there may just be a bunch of flashbacks to remind the audience of how great it was when Glenn was still on the show. 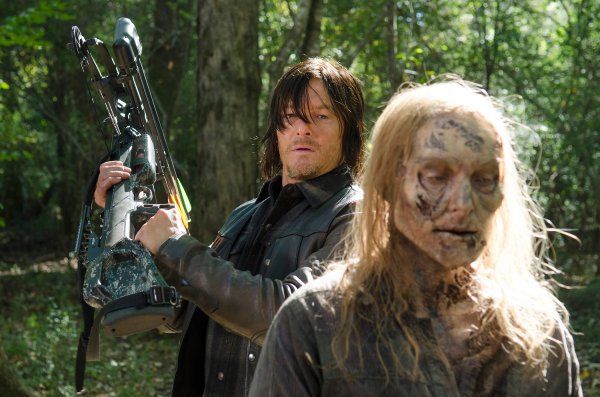 <i>The Walking Dead</i> Gets a Seventh Season
Next Up: Editor's Pick