—The Russian airline that operated the Airbus A321 that crashed in Egypt over Saturday hasn’t paid its staff in over two months, local news agencies reported Monday.

The revelation adds to speculation that poor husbandry on the part of the airline, Metrojet, was to blame for the disaster in which 224 people died, rather than terrorist activity. Russian and Egyptian officials have downplayed claims that the plane was brought down by terrorists, but as yet they have not released any data from the plane’s flight recorders, which were recovered over the weekend. The company again insisted that neither mechanical nor human error had been responsible for the crash, despite anecdotal reports that staff had expressed concerns about the plane’s condition in the days leading up to it.

The website Lifenews cited Alexander Snagovsky, CEO of Metrojet’s parent company Kogalymavia, as putting the wage arrears at around 70 million rubles, or just over $1 million. Interfax and Ria Novosti cited a spokesman for the Federal Labor Office as saying Monday that it was still working out the precise amount. Lifenews quoted the family of Sergey Trukhachov, the co-pilot of the ill-fated plane, as saying that he hadn’t been paid for three months.

Things have gotten a lot worse for the Russian airline sector since the collapse of the ruble at the end of last year, which bankrupted some of the country’s largest tour operators and led to a sharp drop in outbound tourist number this year. The country’s second-largest airline, Transaero, collapsed in October with nearly debts of nearly $1 billion.

With the exception of state-controlled flag carrier Aeroflot, the Russian airline industry has historically operated on a shoestring, using cheap old European and U.S. aircraft to fly its international routes, and even older Russian-built ones to service domestic ones. As a result, the country has the worst air safety record in the world. The weekend disaster was the seventh fatal incident involving Russian airlines in the last five years (one in 2011 wiped out one of the country’s top hockey teams).

It was also the second fatal incident in three years for Metrojet, which rebranded itself in 2012 after three passengers died when one of its Tupelov-154 aircraft caught fire on a runway in Surgut in western Siberia. The A321 that crashed in Egypt had been in service for 18 years, and had experienced a potentially damaging “tail strike” on landing in 2001 (when it was being operated by Middle East Airlines). 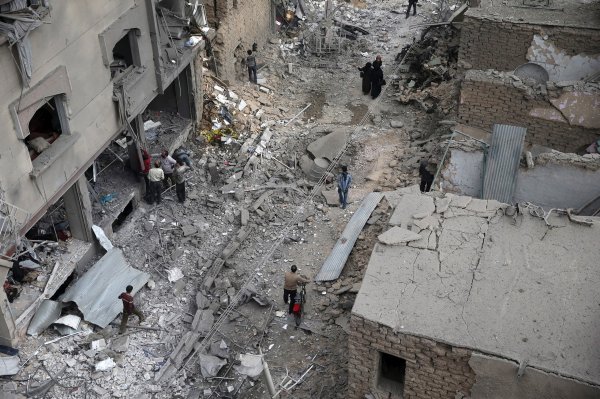 These 5 Failing Middle Eastern States May Be Unsalvagable
Next Up: Editor's Pick