An aerial view of the city of Sansha on an island in the disputed Paracel chain, which China now considers part of Hainan province on July 27, 2012.
STR—AFP/Getty Images
By Nash Jenkins

Chinese naval jets armed with missiles have executed training drills over disputed waters near Vietnam in the South China Sea in an apparent response to what Beijing sees as provocation by the U.S. in the region.

Photos released by the Chinese navy on Saturday show armed fighter jets that military experts say operated out of an airstrip on Woody Island in the Paracel archipelago, the South China Morning Post reports.

The Paracels, along with the larger Spratly Islands to the southeast, are the subject of an increasingly tense territorial dispute between China and several of its smaller regional neighbors, notably Vietnam and the Philippines. Ignoring the maritime boundaries of nearby states, China has occupied and artificially expanded some islets, putatively for military purposes.

Last week, the U.S. Navy sent a guided-missile destroyer within the 12-nautical-mile radius zone surrounding reefs in the Spratly archipelago, saying the ship was merely “exercising the right of freedom of navigation in international waters” — a tacit rejection of Beijing’s territorial claims. The gesture infuriated Chinese officials, including Chinese Navy chief Admiral Wu Shengli, who told Admiral John Richardson, his American counterpart, that a similar “dangerous [and] provocative act” could in the future lead to war between the two superpowers.

The U.S. has not yet publicly responded to the Chinese naval exercises.

“It’s a signal China sent to the US that it is serious about its claims,” Xu Guangyu, a retired Chinese general, told the Post. “This is the minimum level of response China should have, or it will fail the expectation of its people.” 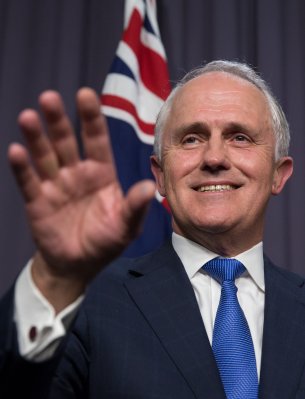 Australian Prime Minister Will Eliminate Knighthoods
Next Up: Editor's Pick