Bangladeshi security officers stand guard at the site where the slaughtered body of Faisal Arefin Deepan was found in Dhaka, Bangladesh, on Oct. 31, 2015.
A.M. Ahad—AP
By Nikhil Kumar / New Delhi

A Bangladeshi publisher who worked with the slain writer and blogger Avijit Roy has been murdered in the country’s capital Dhaka, hours after an attack by machete-wielding assailants left another one of Roy’s publishers in critical condition.

Roy, a Bangladeshi-American writer known for his criticism of religion and fundamentalist violence, was hacked to death in Dhaka in February in what was the first of a series of attacks on secular writers and bloggers in the Muslim-majority country this year.

Faisal Arefin Dipan was one of Roy’s local publishers. On Oct. 31, his father Abul Kashem Fazlul Haq discovered his body when he rushed to his son’s office after hearing about an attack earlier in the day on Ahmedur Rashid Tutul, one of Roy’s other publishers.

“I rushed to his office… and broke the padlock,”Haq told the AFP news agency. “And I saw him lying upside down in a massive pool of blood. They slaughtered his neck. He is dead. He published the books of Avijit Roy. They also attacked other publishers of Roy but only my son died.”

Hours before, three men attacked Tutul at the Dhaka offices of his Shuddhaswar publishing company. Two bloggers—Ranadipam Basu and Tareq Rahim—were also severely wounded in the attack, which occurred at around 3pm local time.

An affiliate of Al-Qaeda operating in the Indian subcontinent took credit for the attacks on the two publishers in a Bengali-language statement posted on social media. “These two atheist-apostates have published books that have attacked the honor of the Prophet [Mohammed] and mocked Islam,” read the statement, according to an AFP translation.

The killings come against the backdrop of growing fundamentalist violence in the country, where four secular-minded writers and bloggers have been murdered since February. All four were connected to massive street protests that shook Bangladesh in early 2013, when hundreds of thousands of young people took to the streets to demand capital sentences of Islamist leaders found guilty of war crimes during the country’s 1971 independence war with Pakistan.

In response, radical Islamist groups launched a campaign to portray all of those connected with the protests as atheists and anti-Islamic. Lists of activists and writers associated with the protests soon began to appear online, featuring the names of Roy and the other bloggers murdered this year.

A recent list, published by Ansarullah Bangla Team, a local militant group blamed for the blogger killings, targeted secular writers and bloggers based in countries as far afield as Sweden, the U.S. and Canada.

Concerns about fundamentalist violence in this South Asian nation of 156 million were renewed in late September with the killing of an Italian aid worker, who was shot dead in Dhaka’s diplomatic quarter. Days later came the murder of a Japanese agriculturalist in northern Bangladesh. In both cases, social media accounts with suspected links to ISIS took credit for the attacks, something the government questions, disputing claims about the presence of the group on its soil. Foreign embassies in the country, however, have issued warnings to their citizens cautioning them against the possibility of terror attacks. Police in Bangladesh have also arrested more than a dozen people over the past year for suspected ties to ISIS.

“Why does the government of Bangladesh allow its own people to live in constant terror of being hacked to death by roving marauders?” Michael De Dora, public policy director at the Center for Inquiry, a U.S. based non-profit that campaigns on free speech issues, asked in a statement issued after Dipan’s death. “How many more of the country’s bravest and brightest lights must be stamped out before the government takes definitive action to protect freedom of expression and the lives of brilliant writers, scholars and activists?”

De Dora also took aim at Bangladesh’s Prime Minister, Sheikh Hasina, for “placing blame on the victims for offending religious feelings. The government should immediately strengthen its efforts against terror groups expected to be carrying out these attacks.”

Speaking to TIME in September, Hasina said her government was investigating the blogger killings and reiterated her commitment to a secular Bangladesh, with space for all faiths. But the Prime Minister sent out an uncompromising message to those like Roy who identify with no religion. “Personally, I don’t support it, I don’t accept it. Why not? You have to have your faith. If anybody thinks they have no religion, O.K., it’s their personal view … But they have no right to write or speak against any religion.” 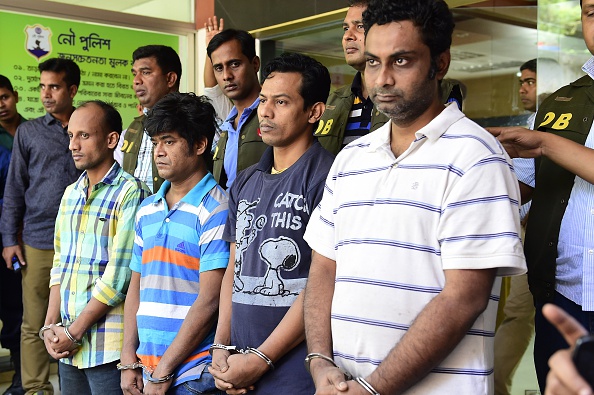