Why Interrupted Sleep Is Worse Than Short Sleep

We’re a nation of unhealthy sleepers. Ten percent of us are insomniacs, many more wake up constantly throughout the night and a growing number are simply too enthralled with our smartphones to put them down and go to bed.

Reporting in the journal Sleep, lead author Patrick Finan, assistant professor of psychiatry and behavioral sciences at the Johns Hopkins University School of Medicine, and his colleagues conducted one of the first studies comparing the two types of sleep—interrupted sleep and abbreviated sleep—in a group of 62 healthy men and women who were good sleepers. The participants spent three days and nights in a sleep lab and answered questions about their mood every evening before dozing off. While they slept, the researchers measured their sleep stages so they could document when and how much of each stage of sleep, from light to deeper slumber, each volunteer got every night. A third were randomly assigned to be woken up several times a night, another third were not allowed to go to sleep until later but weren’t woken up, and the final group, which acted as the control, was allowed to sleep uninterrupted through the night.

When Finan compared the three groups’ mood ratings, he found that the interrupted and short sleepers both showed drops in positive mood after the first night. But on the next nights, the interrupted sleepers continued to report declining positive feelings while the short sleepers did not—they stayed at about the same level they had reported after the first night. This drop in positive mood occurred regardless of what the participants reported on the negative mood scale. So having disrupted sleep, says Finan, may have a stronger effect on dampening positive mood than it does on increasing negative emotions.

When he looked at the brain patterns of the two disrupted sleep groups, he found that those who woke up repeatedly showed less slow wave sleep, or the deep sleep that is normally linked to feeling restored and rested, than those getting the same amount of sleep but in a continuous session. “We saw a drop in slow wave sleep so large and sudden, and it was associated with a striking drop in positive mood that was significantly different than in the other group,” he says.

That has implications for how everything from stress to depression can affect both sleep and mood. Previous data linked poor sleep and depression, and Finan says it may be worth delving deeper into understanding whether depression is associated with more interrupted sleep or shorter sleep. It’s also not clear whether there is some threshold at which too little sleep begins to adversely affect positive mood in the same way that disrupted sleep does. “It appears that losing slow wave sleep impairs the ability to recover or stabilize positive emotions in response to stressors,” he says. “So we should be paying attention to not just the quantity or quality of sleep, and not simply the quantity or quality of mood or emotions, but the combination of the two. It’s not news that sleep problems alter people’s mood. But the granularity we measured here sheds new light on that relationship.” You can’t avoid the demands of juggling your work and family obligations, and the inevitable stresses that any relationship entails, but you just might be able to lessen the blow with sleep—as long as it’s uninterrupted. 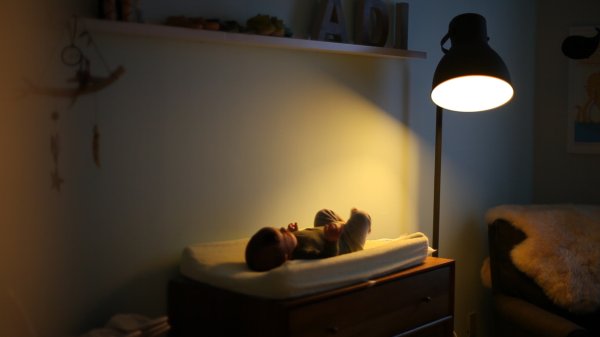 How This Light Could Help Your Baby (and You) Sleep Better
Next Up: Editor's Pick