The Murder That Shook Israel

U.S. President Bill Clinton (C) stands between PLO leader Yasser Arafat (R) and Israeli Prime Minister Yitzahk Rabin (L) as they shake hands at the White House in Washington D.C. on Sept. 13, 1993.
David Ake—AFP/Getty Images
Ideas
By Gil Troy
Troy is a professor of history at McGill University and the author of The Age of Clinton: America in the 1990s.

On Nov. 4, 1995, an Israeli extremist shot Israeli Prime Minister Yitzhak Rabin. This murder unnerved Israel, triggering anguish from left to right about the country’s future. Unfortunately, most commemorations of this dark day’s 20th anniversary will forget the confusion of the time, oversimplifying Rabin’s legacy. Memorials will honor a touchy-feely grandfatherly peacemaker and stir traditional Jewish guilt by claiming the assassin killed the Oslo Peace Process between Israelis and Palestinians. In fact, Rabin, a gruff warrior, was already mourning Oslo’s derailment amid a wave of Palestinian suicide bombings.

Just as John F. Kennedy’s martyrdom lionized a mediocre president, Yitzhak Rabin’s martyrdom transformed his image. President Bill Clinton’s affection and Western assumptions about what a murdered peacemaker must be like romanticized this tough, hard-drinking, chain-smoking soldier. When Rabin was Israel’s ambassador to the U.S., after a White House dinner President Jimmy Carter asked if Rabin would like to hear young Amy Carter play the piano. Rabin brusquely said “no,” then ground his cigarette into the carpet.

Rabin mellowed with age. “I really loved the man,” Bill Clinton recalls. Rabin found his voice. Signing Oslo’s Israeli-Palestinian Declaration of Principles with Yasir Arafat on the White House lawn in 1993, speaking as a solider who “returned from the battle stained with blood,” Rabin declared: “Enough of blood and tears! Enough!” A year later, noting that “The terrorist organizations continue to attack us,” he warned: “It is still too early to return the sword to its sheath.” But, amid “promising signs,” he exclaimed: “These days we are in the midst of a battle without cannons in a war without fire,” fighting not just for survival, but for peace.

Rabin was struggling because Hamas’s bombs were exploding. The Rabin legend claims his killer “murdered hope,” ultimately triggering Yasir Arafat’s war of suicide bombings. Clinton burnished that legend on Saturday night in Tel Aviv, echoing the interview he gave two years ago that was just broadcast in Israel. Rabin would have concluded a peace deal within three years, because “the Palestinians trusted him,” Clinton insisted.

But Rabin’s murderer did not stop the peace process; Hamas, Islamic Jihad, and Palestinian rejectionism did. Palestinian terrorists unleashed five suicide bombings in 1994, four in 1995 and four in 1996—unaffected by the Rabin horror. Each terrorist murder betrayed Oslo’s promises, embittering Israelis who were expected to cede territory, to take the biggest risks.

In her award-winning book Israel: A History, the leading historian Anita Shapira notes: “The rejectionist organizations …. were determined to undermine the accords through terrorism.” Unfortunately, they succeeded. Rabin’s government was fragile, partially because of the hardheaded Rabin’s insensitivity to “the settlers’ heartache.” The popular “The People are with the Golan” campaign, warning against trusting Syrias’ brutal Assad regime, “further undermined the government’s stability.”

The assassination backfired. Rabin became Israel’s Prince of Peace. With the right suddenly “defensive,” the American diplomat Dennis Ross recalls, with the public sobered, “we tried to seize the moment.” Bill Clinton’s “Shalom Haver”—Goodbye my friend—group hug for Israel and Oslo, leading 80 heads of state to Jerusalem for Rabin’s funeral, boosted the flagging negotiations, despite the terrorism.

Yitzhak Rabin didn’t have to be perfect to be the “inspiration” Bill Clinton found him to be. Remembering a leader who, despite his flaws, matured, risking for peace, finding his voice, softening his approach, makes him more accessible to the rest of us, with all our flaws, and thus a more effective and authentic role model. 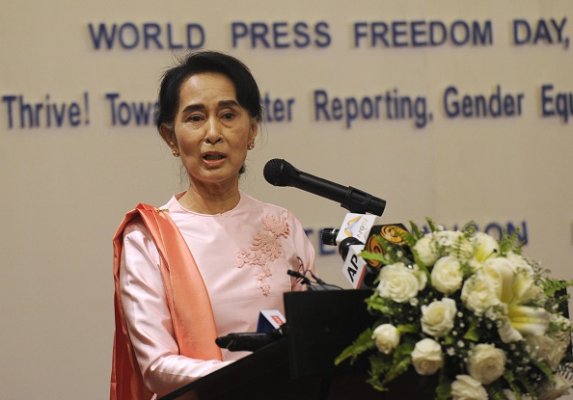 How Free Press Is the Best Weapon In America's Information War
Next Up: Editor's Pick