Bay Area-based Flywheel has positioned itself as a company that will keep cabs relevant in the Age of Uber. And on Thursday, the company announced a new strategy for streamlining the clunky, unpleasant business that has long been associated with cabs.

Until now, Flywheel has been courting consumers and taxi fleets much like Uber and Lyft court their drivers and users: offering free software to both passengers and drivers to connect through an app, and then taking a cut of the fares. For the thousands of drivers who have signed on in cities such as San Francisco and Los Angeles, that typically meant adding another piece of equipment to their cars, placing a smartphone alongside the meter and payment system for street hails.

Now the company is trying to sell cabs on replacing all their hardware—the screens, the cables, the machines, the dispatch system—with that smartphone, a Square-like credit card processor and new software that the company believes is the first to accurately do the job of meters, using GPS data to calculate how far the car has gone rather than traditional means like tire rotation. They’re touting TaxiOS as “the first all-in-one mobile technology platform” for drivers and San Francisco as the first city to launch a virtual meter.

“We work heavily with regulators,” says Oneal Bhambani, Flywheel’s CFO, “and they know the phone is the right way to go,” rather than “this funky old equipment.” Flywheel is working with city officials on a pilot program in New York and will launch cabs in the Bay Area with “the blessing” of the taxi-regulating San Francisco Municipal Transportation Agency, he says.

If it works, their new gamble will serve two purposes for a company that has been lagging behind Lyft and Uber. Though the hardware and software will be given to taxi drivers for free, the company will take a cut from every credit card payment processed, giving Flywheel a new way to make revenue off street hails as well as leads generated through the app. And the cabs using the hardware will be populating the maps that Flywheel users see when they open the app, giving the company another way to increase the density of drivers in their system, reducing wait times for users.

Pivoting to taking on hardware manufacturers such as Verifone may seem like lower-hanging fruit than simply taking on Uber at its own game. While Uber is now live in 63 countries, Flywheel’s consumer-facing app works in just six American cities. Earlier this month, New York’s Taxi and Limousine Commission, which regulates cabs, voted to look for sleeker, less invasive alternatives to the largely disliked and ignored taxi TVs.

And Flywheel is hoping that they’ll eventually be the vendor servicing the city’s more than 13,000 cabs. “Some of the reason these other companies have scaled so fast is because the only equipment they need is a smartphone,” Bhambani says. “You just have to have a smartphone as a gateway to these taxis.” 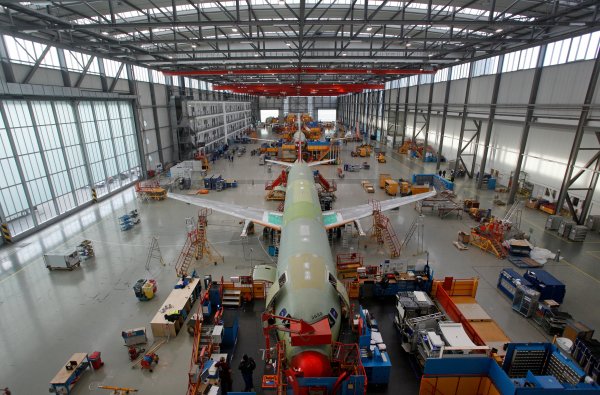 Airbus Just Signed a Massive Aircraft Deal With China
Next Up: Editor's Pick