Game of Thrones fans aren’t the only people inspired by Emilia Clarke’s portrayal of Daenarys Targaryen. The star, whose character also goes by Khaleesi, revealed where she finds her character’s strength in an interview with TheWrap.

Before she even got the role, she had to use her imagination during the audition process.

“The role of Khaleesi is tall and willowy and blonde, I’m short and round and brown,” she said. “So they weren’t, like, she can do that role, easy!”

And once she earned the throne, she sought inspiration through “as many strong women” as she could.

“Cate Blanchett in Elizabeth was something she watched a lot in preparation for season one. And the fact that it’s rooted in reality, to know I was able to replica a real, strong female leader.”

Clarke says she was brought up by a very strong mum, who taught her that there was no difference between men and women.

“I can see the cracks, and it’s surprising and shocking and saddening that that is the case, that women are perceived differently, that people perceive there is a difference in how men and women should be treated, just simply in the way that it is,” she says. “It seems to not be discussed. You just begin to see that you, as a girl, are treated differently, even when you’re playing the Mother of Dragons.”

Just like Khaleesi, Clarke doesn’t let that get her down. Instead, she draws on the character for her own life.

“Being associated with that kind of allows you the space to fill a certain strength,” she says. “Being able to play this strong girl, you can kind of take notes and see how I can apply that to my own life.”

Clarke’s power as a woman is ever apparent in how she handles criticism. When she was judged in September for comments about the show’s nudity and how she “can’t stand” sex scenes, she fired back and clarified her statements on Instagram, explaining her words were taken out of context.

“If it’s gratuitous for gratuitous sake, then I will discuss with a director on how to make it more subtle. In either case, like a good Mother of Dragons, I’m always in control.” 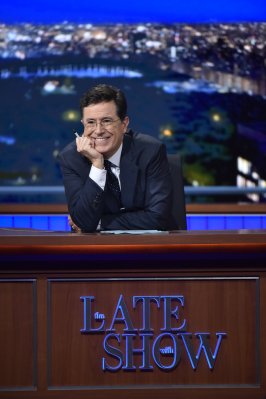 Watch Stephen Colbert's Heartfelt Response to the Oregon Shooting
Next Up: Editor's Pick