Former Episcopal Bishop Heather Cook, who pleaded guilty last month in the drunk-driving hit and run death of cyclist Thomas Palermo, is led from the courtroom after receiving a seven-year sentence on Tuesday, Oct. 27, 2015.
Baltimore Sun—TNS via Getty Images
By Nash Jenkins

A former high-ranking Maryland bishop who fatally struck a cyclist while driving under the influence of alcohol last December will go to prison for seven years, a judge in Baltimore ruled on Tuesday.

On the afternoon of Dec. 27, Heather E. Cook, at the time the second-highest ranking bishop in the Episcopal Diocese of Maryland, got into her Subaru Forrester and began driving through the affluent Baltimore neighborhood of Roland Park. Police would later measure her blood alcohol level at 0.22, nearly three times the legal limit.

Police said Cook was texting as she drove, and thus did not see Thomas Palermo, a 41-year-old software engineer and father of two who was out for a bike ride. When she hit him, his head came through the windshield and his helmet landed in the car before his body collapsed to the street, but she drove away from the scene, saying she only returned when she realized a person had been injured. Then she left again, to drop her golden retriever off at her house, and then turned herself in to the authorities.

“Your leaving the scene at that time was more than irresponsibility, it was a decision,” Judge Timothy J. Doory said to her in court on Tuesday.

In September, Cook pleaded guilty to vehicular manslaughter, leaving the scene of an accident, and other violations. Palermo’s family had hoped for a ten-year sentence with no probation.

This was not the first time Cook faced legal consequences for driving while under the influence. In September 2010, police on Maryland’s Eastern Shore pulled Cook over to find the religious leader with a blood-alcohol level of 0.27, vomit on her clothes, and alcohol and two bags of marijuana in the vehicle — an incident that she would later describe as a “major wake-up call.”

In the courtroom on Tuesday, Cook turned to Palermo’s family and apologized “for the grief and the agony [she has] caused.”

“This is my fault,” she said. “I accept complete responsibility.” 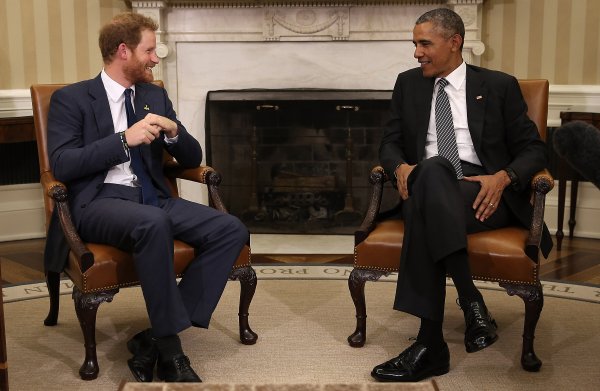 Prince Harry Visits the White House
Next Up: Editor's Pick